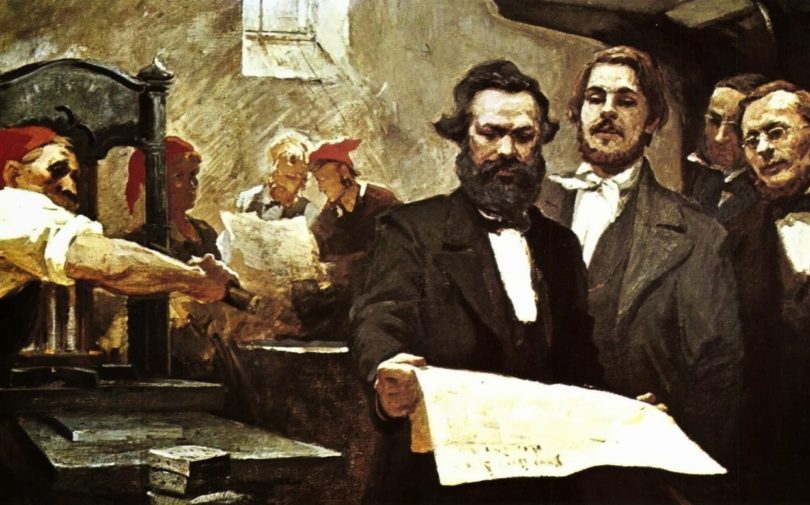 The 199th birth anniversary of Karl Marx was celebrated on the fifth of May this year. Once again Marx has been the subject of criticisms and the raucous din of the corporate media and its intelligentsia that ‘Marxism has failed’. Ever since the fall of the Berlin wall, the collapse of the Soviet Union and reversion of the Chinese bureaucracy to the market economy there has been a barrage of vicious propaganda to discredit and debase the ideology of scientific socialism developed by Karl Marx. The so-called socialists and communists in Pakistan and elsewhere blindly following Moscow and Peking joined this ferocious chorus of the bourgeois in castigating Marxism. The prevalent politics and intellectual discourse have dumped revolutionary socialism in the dustbin of history again and again. Yet every so often Marxist ideas and theory prop-up recurrently as the solution to the crisis and political chaos of capitalism exacerbating.

But there is nothing new in it. Ever since the teachings of Marx challenged the exploitative system it has evoked the utmost hostility and hatred of all bourgeois propensities. The capitalist stooges in politics, religion, society and the state are terrified of Marxism as a science that can guide the working classes to lead the overthrow of their brutal rule. There can be no “impartial” political doctrine in a society based on class conflict. All official and liberal science defend capitalist drudgery in one way or the other, whereas Marxism declared a relentless war against class oppression. To expect science to be impartial in a society riddled with class contradictions is to expect impartiality from exploiters and plunderers of the working people. It is naïve to even think that these vultures scavenging the toilers and the impoverished can ever do justice in a society where profits are basically the appropriated labour of the working classes.

However, the collapse of the Soviet Union was a gigantic event of historic proportions and had a negative impact across the world particularly in the former colonial countries. Their inhabitants looked up to the enormous development of social and physical infrastructures in Russia as compared to the squalor and misery of these neo-colonial societies. But what the corporate media has concealed is the fact that it was only the Marxists who scientifically explained the shortcomings, distortions of the bureaucratic ruling elites and predicted the fall of the Soviet Union. None of the renowned universities of the bourgeois or their much-flaunted professors and theoreticians ever had this foresight. Above all, it was the leaders of the Bolshevik revolution, Vladimir Lenin who posed clear tasks for the Soviet leadership and warned that if these were not accomplished “the Russian Revolution would be doomed” as far back as 1921. Trotsky in his brilliant analysis, ‘The Revolution Betrayed’ had graphically predicted the demise of Soviet Union on the scientific basis of Marxism in 1936.

Hence, for the genuine Marxists, the collapse of the Soviet Union in 1991 was not surprising and their struggle for revolutionary Marxism persisted in those adverse objective conditions. New generations of youth have come to the fore in this post-Soviet period of more than quarter of a century. The lack of a mass upsurge of the toiling classes in Pakistan at the present time is being used to cast doubts on Marx’s principle of class struggle by the corporate media. The cynical intellectuals are vilifying his ideas in this period of mild reaction. The slander against Marxism is intense but still fails to remove this scientific ideology from the political debate. Revolutionary periods are historical exceptions. In ordinary times such as the one we are passing through the retrogressive and conservative tendencies seem to dominate the social and political milieu. But then revolutions can erupt suddenly, surprising even the most advance revolutionaries. Trotsky wrote in his epic work, The History of the Russian Revolution,

“But why after all is political slander as such so poor and monotonous? Because; the social mind is economical and conservative. It does not expend more efforts than are necessary for its goal. It prefers to borrow the old, when not compelled to create the new. But even when so compelled, it combines with it elements of the old… A bold imagination lives in the same skull with a slavish adherence to trite images. Audacious flights reconcile themselves with crude prejudices. Shakespeare nourished his creative genius upon subjects handed down from the deep ages. Pascal used the theory of probability to demonstrate the existence of God. Newton discovered the law of gravitation and believed in the Apocalypse. After Marconi had established a wireless station in the residence of the pope, the Vicar of Christ distributed his mystic blessing by radio. In ordinary times these contradictions do not rise above a condition of drowsiness, but in times of catastrophe they acquire explosive force. When it comes to a threat against their material interests, the educated classes set in motion all the prejudices and confusion which humanity is dragging in its wagon-train behind it.”

Most who attack Marx have not even read a single work of this great teacher. Those who have read for academic purposes can never understand the essence of this revolutionary theory. Marx had predicted more than 160 years ago that capitalism will reach a stage in its evolution of globalisation where wealth accumulation will be concentrated in fewer and fewer hands and the vast majority of the humanity will be shoved into the abyss of destitution and deprivation. Today only eight individuals own more than half of the wealth of this planet while more than two-third of the human race is drenched into the quagmire of varying degrees of poverty and misery. There has never been a greater gulf between the rich and the poor in the history of mankind. The development of science and technology have for the first time created a capacity of production that if the modes of production were liberated from the shackles of private ownership and rate of profits production would exceed fulfillment of the human need, and humanity can ultimately be freed of want and exploitation.

Its only Marxism that explains and presents a thoroughly constructed strategy and a scientific ideology that can bring about the fundamental change for the emancipation of the humanity. Lenin wrote in the preface to his article, ‘The three sources and three component parts of Marxism,’ in the Bolshevik paper, Prosveshcheniye No 3 published in March 1913. “The Marxist doctrine is so profound because it is true. It is comprehensive and harmonious and provides men with an integral world outlook irreconcilable with any form of superstition, reaction, or defence of bourgeois oppression. Marx’s philosophical materialism alone has shown the proletariat the way out of the spiritual slavery in which all oppressed classes have hitherto languished. Marx’s economic theory alone has explained the true position of the proletariat in the general system of capitalism.”

In Marx’s life, the only revolution that erupted was the ‘Paris Commune’ of 1871, which was drowned in blood by the joint crusade of the arch-imperialist rivals, the French and the German ruling classes. In his last years, the setbacks from the defeat of The Paris Commune were tremendous. But Marx never lost hope in the revolutionary transformation of society and the prosperous and bright future of mankind. He was firmly convinced of the socialist victory that would lead humanity from the “realm of necessity to the realm of freedom.” In one of his epic works ‘The eighteenth Brumaire of Louis Bonaparte’ Marx had expressed his revolutionary optimism in these words,

“Men make their own history, but they do not make it as they please; they do not make it under self-selected circumstances, but under circumstances existing already, given and transmitted from the past. The tradition of all previous generations weighs like a nightmare on the brains of the living. And just as they seem to be occupied with revolutionizing themselves and things, creating something that did not exist before, precisely in such epochs of revolutionary crisis they anxiously conjure up the spirits of the past to their service, borrowing from them names, battle slogans, and costumes in order to present this new scene in world history in time-honoured disguise and borrowed language.”