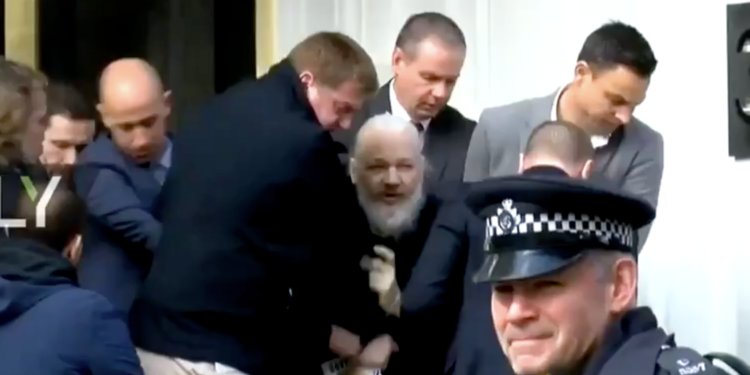 I’ve been to see Julian Assange at the Ecuadorian Embassy several times, mainly when Rafael Correa was President and the Embassy felt like a liberated space. A few weeks ago I met him again. By now Correa’s successor, Lenín Moreno, had capitulated on every level to the American Empire. The Embassy became a prison and Assange’s health deteriorated. He was in no doubt that Moreno had been asked and had agreed to expel him from the Embassy. The US demand for extradition was no longer a secret. The Embassy handed him over to the British police earlier today (11 April, 2019).

If we lived in a world where laws were respected, then Assange would be charged with jumping bail (a minor offense), fined or kept in prison for a few weeks and then released to return to his native Australia. But both the UK and Australia are, effectively, imperial satrapies and likely to bow to US demands. The secret and not-so-secret state in both countries work closely with (or under) its US masters. Why do they want him so badly? To set an example. To incarcerate and isolate him as a warning to others not to follow the Wikileaks path. Chelsea Manning has been re-arrested because she refused to testify to a Grand Jury against him. Since the Russian and Chinese intelligence agencies are pretty much aware of what the US is up to in most parts of the world, the threat posed by Wikileaks was that it made its information available to any citizen, anywhere in the world, who possessed a computer. US/EU foreign policy and its post 9/11 wars have been based on lies, promoted by global TV and media networks and often accepted by a majority of North American and European citizens. Information contradicting these lies challenges the stated motives for war — human rights, democracy, freedom, etc.

Wikileaks has been exposing all this by publishing classified documents that shine a light on the real reasons. It is an astonishing record. Till now WikiLeaks has published almost 3 million diplomatic cables and other US State Department records, comprising some two billion plus words. This stupendous and seemingly insurmountable body of internal state literature, which if printed would amount to some 30,000 volumes, represents something new in the world. This is where the Internet becomes a subversive force, challenging the propaganda networks of the existing order. Assange and his colleagues made no secret that their principal target was the American Empire and its global operations. The response of US institutions has been hysterical and comical. The Library of Congress, blocked Internet access to WikiLeaks. The US National Archives even blocked searches of its own database for the phrase “WikiLeaks.” So absurd did the taboo become that, like a dog snapping mindlessly at everything, eventually it found its mark — its own tail. As Julian Assange pointed out: “By March 2012, the Pentagon had gone so far as to create an automatic filter to block any emails, including inbound emails to the Pentagon, containing the word ‘WikiLeaks.'” As a result, Pentagon prosecutors preparing the case against US intelligence analyst PFC Manning, the alleged source of the Cablegate cables, found that they were not receiving important emails from either the judge or the defense.

The British government is insisting that they will follow the law. We shall see. The US Department of Justice has stated that Assange could face five years in a US prison. Diane Abbot, a leading member of Jerremy Corbyn’s Shadow Cabinet, said in parliament today (11 April, 2019):

“On this side of the house, we want to make the point that the reason we are debating Julian Assange this afternoon – even though the only charge he may face in this country is in relation to his bail hearings – is entirely to do with the whistleblowing activities of Julian Assange and Wikileaks. It is this whistleblowing activity into illegal wars, mass murder, murder of civilians and corruption on a grand scale that has put Julian Assange in the crosshairs of the US administration. It is for this reason that they have once more issued an extradition warrant against Julian Assange … Julian Assange is not being pursued to protect US national security, he is being pursued because he has exposed wrongdoing by US administrations and their military forces.”

We will learn more in the days and weeks ahead. In the meantime, Wikileaks and its founder expect and deserve the solidarity of all those of us who believe that citizens should not be treated like children and that most politicians in the US/EU orbit are untrustworthy and hate their lies and corruptions being exposed.