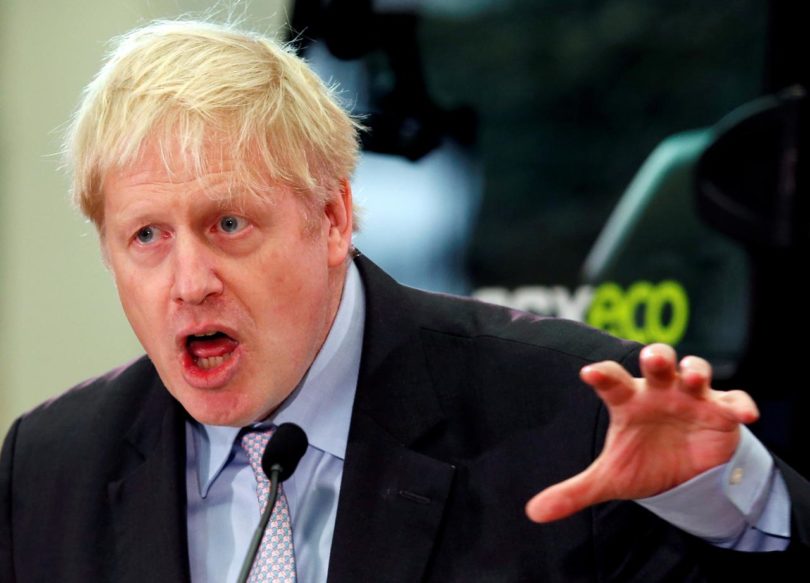 The election of Boris Johnson as Tory leader and Premier changes nothing fundamental in British politics. All his supposed ‘charisma’ will count for nothing. His “rhetorical flourishes” the Financial Times points out, will not mask the “harsh realities” he faces.

Johnson’s elevation marks a further decline in the quality of the political representatives of British capitalism. Once the British ruling class and its political representatives thought in terms of continents and centuries but in today’s Britain, a typical business plan is based on short-term greed, tomorrow’s profits and executive bonuses. As for the Conservative Party, it is mired in xenophobia and self-delusion, smeared with the grime of contending personal ambitions. For the second time in a decade, we have a Tory leader ‘schooled for leadership’ on the playing fields of Eton, followed by Oxford and the posh hooligans’ outfit known as the Bullingdon Club. This is a class and a party that are steeped in crisis and which have nothing to offer the overwhelming majority of the population, except unending austerity, poverty and cuts in living standards.

It is almost impossible to predict precise outcomes in British politics over the next few months. The only thing that can be said with any certainty is that British capitalism faces its greatest political, economic and perhaps constitutional crisis for generations. Johnson has won over the geriatric membership of his party by promising Brexit by the end of October, ‘do or die’, but his ability to achieve that is in some doubt. Last week, 36 Tory MPs either abstained or voted against the government, to express their opposition to the no-deal Brexit that Johnson is threatening. With a parliamentary by-election in the offing and the possible resignation of some Tory MPs from the party, Johnson barely has a majority in parliament, if he has a majority at all. Whether or not he can steer his way through the House of Commons is therefore open to question.

Between Two Rocks and a Hard Place

For their part, the leaders of the EU appear to be determined not to accept any re-negotiation of the deal they agreed with Theresa May. Johnson is a politician devoid of any guiding principle beyond his own ambition, so we take for granted that anything he has said in his election campaign might be contradicted by what he says or does straight afterwards. But he has very little room to manoeuvre between apparent EU intransigence, a House of Commons unwilling to accept a no-deal Brexit and a Tory Party (and up-coming conference) hell-bent on a hard Brexit. He is between two rocks and a hard place.

For very plausible reasons, there is speculation on the likelihood of an autumn general election. It is certainly a possibility, but it is one with serious risks to the Tory Party. Conservative candidates only managed to get 9 per cent of the vote in the May Euro-elections and this side of Brexit, Nigel Farage’s party will be a significant complicating element in any general election. Many Tory MPs risk losing seats to Brexit Party or Labour candidates. Labour was twenty points behind in the polls when the 2017 general election campaign started and yet it came within a whisker of winning. That lesson will not be lost on the Tory leadership, even factoring in a ‘Boris bounce’ in their fortunes.

It would be wrong to try to make facile predictions of likely outcomes in the next few months, therefore. Volatility and uncertainty are the principal characteristics of British politics today. All we can do is identify some of the main features of the looming political crisis.

The first of these is the crisis in the Tory Party itself. Political honeymoons are usually measured in months, or at least in weeks. Johnson’s honeymoon would last days or even hours were it not for the imminent summer parliamentary break. As we have argued in many articles in the past, the crisis in that party between the Brexit and Remainer wings will inevitably lead to splits, with the possibility of alliances with the Brexit Party (before Brexit) or defections to it. Other Tories might split away, as some like Anna Soubry have already done, to one of the small pro-EU parties, possibly the Liberal-Democrats.

The second important element in the situation is the ideological split inside the Labour Party and the unwillingness of the old-guard right-wing to be reconciled with Jeremy Corbyn and a radical-leaning Labour membership. The closer the Labour Party comes to a general election, the more desperate the Blairite right-wing becomes and the more it actively seeks to sabotage the party’s chances. In the last few weeks, we have seen a very public petition of right-wing MPs demanding the suspension of Chris Williamson MP (as indeed he was), a full-page anti-Corbyn advert in a national newspaper signed by 67 Labour peers and more threats of walk-outs. While ex-Labour MP Chuka Umunna has found his natural home in the Liberal-Democratic Party, there are scores more like him still in the Parliamentary Labour Party, with the same outlook, the same political views and the same festering hatred of anything remotely radical, never mind ‘socialist’.

We should not mince words over these people. They are ‘Labour’ in name only. Many so-called ‘Labour’ MPs and peers would far rather see a Tory government stay in office than see Labour under Corbyn win a general election. They are organically and ideologically opposed to the radical policies outlined by Jeremy Corbyn and John McDonnell in the Labour manifesto of 2017. Capitalism, the so-called ‘free market’ system, is in their political DNA. They have used the issue of anti-Semitism – supported enthusiastically by the anti-Labour press and the BBC – as a stick with which to beat the leadership. Whatever Jeremy Corbyn does on anti-Semitism – whatever he does – it will never be enough for the right-wing. They want Corbyn out and they want a Labour disciplinary system that gives them carte blanche to expel any left-wing members from the party.

Unfortunately, there have been many on the left of the Labour Party, notably the self-elected leadership of Momentum, who have buckled under the relentless pressure of the media against Corbyn. They have caved in on the two key issues of the anti-Semitism campaign and on Open Selection, which would have been a means of selecting candidates who back the leader. Emboldened by the weakness of this section of the Labour left, therefore, Labour’s right-wing will make more attempts to remove the Labour leader. In our editorial on June 13, we wrote, “When a new Tory leader is installed in July, watch out for a new, perhaps more serious, challenge to the Labour leadership” and we stand by those words.

There may well be a few weeks of relative calm as parliament goes into its summer recess but the pace will quicken again at the end of August. Labour must continue to fight for a general election. If we asked the question, “what are people talking about at work, in shops, offices and in bus queues?”, we have a fairly good idea what the answer would be. They would be highly unlikely to be talking about anti-Semitism. They might be talking about Brexit. But what will definitely arouse passions will be bread-and-butter issues that impinge on their daily lives: poverty, low-pay, difficulties in paying rents or saving for mortgages, NHS cuts, library closures and all those things that reflect the experience of austerity in the last ten years. These are still the issues on which Labour needs to focus and campaign.

British capitalism and its Tory representatives offer nothing to men, women, young people or to the working class in general, those who form the big majority of the population. The Tories’ system benefits only the millionaire-class, while it is destroying living standards for the many. On an international scale it even threatens the existence of human civilisation through climate change.

The Labour Party and particularly the Labour left must not weaken its resolve. If and when a general election is called, readers and supporters of Left Horizons will join the fight alongside hundreds of thousands of other party workers and youth to return Labour to office. A Labour government committed to socialist policies offers a way out of the circus of Boris Johnson’s politics and when the opportunity comes we must grasp it with both hands.