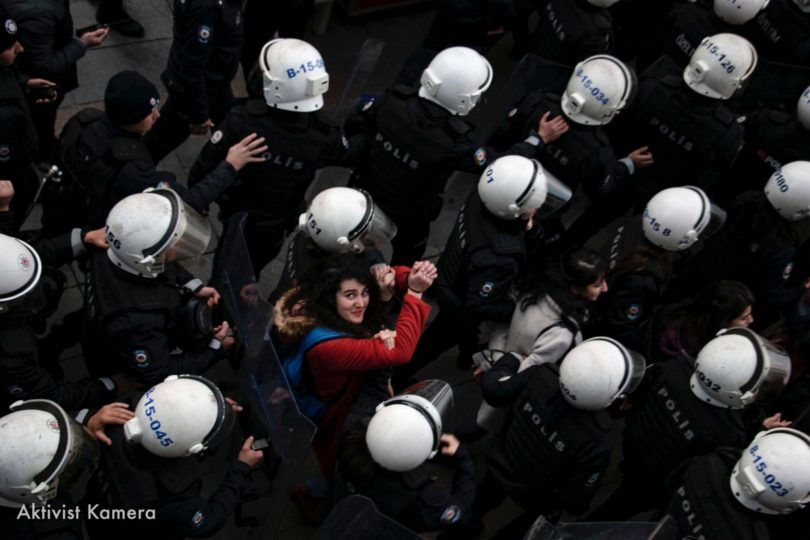 The Chilean upsurge against the neoliberalism and Sebastián Piñera inspired the world more than ever. The women movement inspired by Las Tesis – the rapist is you – performance spread to the world. It was performed in many countries including Latin American, France, Turkey and many more. A new wave of women movement arises and protests inequalities, femicides, violence, abortion bans, rape, sexism, women unemployment, and poverty. This new wave of women movement has the possibility to aggravate the rebellions against neoliberalism and dictators around the world. A new wave of class struggle makes women movement stronger than ever and women who are at the forefront of these struggles give courage to others.

After the 2008 crisis, far-right politicians came to the power with their aggressive anti-worker austerity programs and these sexist and homophobic politicians could impose their sexist politics, thanks to the neoliberal agenda that is the kickstarter of this new wave. Millions of women seek free, independent and equal social and work life that causes huge contradictions with the capitalist system. This is also the case for Turkey.

Under Erdoğan’s regime, the rate of femicides is tragic. So far, this year the registered murders of women are 430! Some of them were killed after they applied for protection or despite the order of protection. There are two symbolic examples. Cases of Ayşe Tuğba Aslan and Şule Çet. Ayşe Tuba Arslan died as a result of a line attack by her ex-husband after she filed more than 23 criminal complaints against him. She wrote in her last petition, “Will you help me when I die?” There is another case of Şule Çet, a 23-year-old university student fell to her death from the 20th floor by her boss. With bribe and false reports, the murderer boss was released twice! The judge questioned her virginity and lifestyle. After numerous protests on the streets, hundreds of activists attended the trials and after the nationwide campaign, the murderer was sanctioned for life imprisonment. There are countless examples of such horrible incidents.

In Turkey, Erdoğan’s conservative regime hates the idea of women’s right to divorce and independent life. They want to keep women silent and to ‘tolerate’ domestic violence in order to build a conservative country that Erdoğan has been dreaming of. Sexist politics, failed judicial system and Islamist discourse made rape, violence, femicide the growing problems in these sixteen years of Erdoğan rule. The case of rape or femicide is not publicised, the judiciary sweeps these cases under the carpet. This results in social anger and caused a new wave of women movement. Despite police brutality, women continue to take the streets and more women are taking part in this movement.

When Las Tesis protest performed in İstanbul and İzmir, 32 women were detained. It is not surprising that Turkey is the only country where women were attacked after they performed an anti-rape performance. The Minister of Interior declared that they were attacked because they identified the state and police as “rapist.” The main reason behind this attack is more than their misogynism.

The objective conditions of a social explosion in Turkey are maturing. In Iran, Lebanon and Iraq millions are on the streets and fighting heroicly. The ruling class of Tukey is afraid of a kickstarter event that can spread throughout Turkey. The economic crisis hit the country so bad that Turkey has a record level of unemployment at 13 per cent and the minimum wage is below the hunger line. Three families in a row committed suicide with cyanide. Every day we witness one or two suicide news of the poor or unemployed people. The working class movement also demonstrates an upward trend. The women movement in Turkey, which has been developing for a couple of years, should be considered with the combination of this social background and be seen as a reaction against the moderate-Islamist regime of Erdoğan.

In Turkey, the women movement is basically focusing on the violence with a liberal and radical feminist tendency and excludes working class women’s demands and discourses. This would not be enough for a women victory. Without a socialist alternative to these social problems, in a country under a dictator and in the middle of an economic crisis, women movement alone cannot gain decisive victories. The women agenda based on an “anti-male” discourse cannot have a possibility to attract the working class women which suffers deep poverty, unemployment and violence badly. When only the middle class and young women are on the street, we cannot go beyond our current limitations. We have to extend the struggle with working class women’s demands such as equal pay, women employment etc. If we want to get rid of these weaknesses and make the regime step back, we have to build our movement and social campaigns that can attract millions of the oppressed. Las Tesis performance and the anger after the women’s detention manifests that social opposition and women movement has great potential. Socialists should intervene with a socialist programme.

The Erdoğan’s government, that blames women all the time, hates the women on the streets chanting “the fault is not mine!”, “it is the police, the judges and the president!”. This brave women movement should be equipped with the means of class struggle to overthrow Erdoğan’s dictate, to stop femicides, to stop violence, to end poverty. We will not let them give courage to the murderers and rapists with their policies. And we will do even more. We will organize a revolutionary women movement along with working class and stand against all the capitalists and reactionaries. Because “It is not our fault!”, It is your Capitalist system.