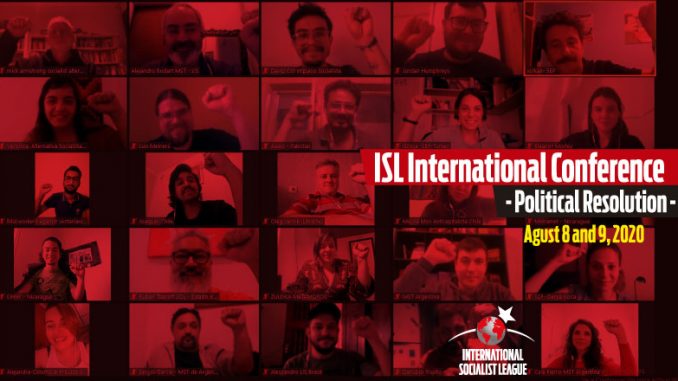 The Covid-19 pandemic, which has already taken the lives of at least 700,000 people, has unmasked the barbarism of the capitalist system, and precipitated and exacerbated the profound capitalist crisis that was beginning to unfold towards the end of 2019.

Capitalism had failed to recover from the systemic crisis that erupted in 2008 when it was headed for a new global recession last year. The capitalists and their governments responded in the only way they know, intensifying their war against workers and the planet to save their profits; with more austerity, massive layoffs, precariousness, attacks on workers’ wages, pensions and living conditions; more plundering, extractivism and destruction; more cuts to social and democratic rights; more repression to push through their austerity plans; and greater inter-imperialist conflicts, mainly between the US and China, in a dispute over a shrinking mass of global surplus value.

The working masses responded by unleashing a wave of rebellions and revolutions that covered, in a few months, the most diverse regions of the planet, with epicenters in countries like France, Chile and Lebanon, but of regional scope and global impact. The processes presented everywhere some common characteristics: massive mobilizations against the austerity plans of capitalism and its governments, and large scale radicalization with the youth and women at the vanguard.

Consequently, the social and political polarization that has been growing in the world since 2008 deepens. The absence of revolutionary leaderships with mass influence and the insurmountable limits of bourgeois nationalism, the center-left and reformism have allowed sectors of the right and far right to reach governmental office in various countries, but these quickly lose support because they do not solve the people’s problems nor defeat the mass movement. And this has not stopped the expansion and radicalization of an important, mostly young, vanguard that creates new opportunities for solving the most important of historical tasks: the construction of the revolutionary leadership of the world labor movement.

The Covid-19 pandemic came to exacerbate all the contradictions of the capitalist crisis and the class struggle. The capitalist crisis that was brewing was precipitated, causing the deepest global recession in almost 100 years. Capitalist governments dedicated themselves to safeguarding the interests of the bourgeoisie at the cost of the health and lives of millions, while unemployment and poverty have reached historic levels. But the response of the masses is also intensifying. The gigantic rebellion in the heart of the empire after George Floyd´s murder, which led millions to take to the streets, despite the United States being one of the countries most affected by coronavirus, clearly demonstrates this. The resurgence of mobilization in France, Brazil, Lebanon and other countries also indicates that the dynamic of world rebellion will only deepen after the pandemic.

Those of us who build the International Socialist League commit to tirelessly fight until all this becomes reality.