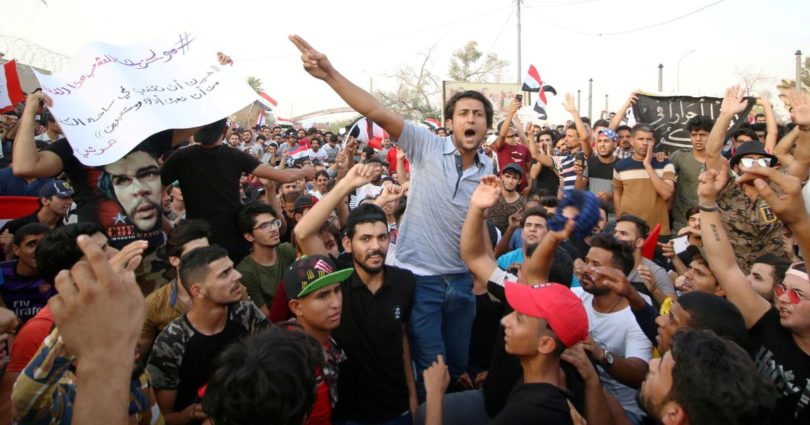 More than 15 years of Imperialist aggression and occupation combined with harrowing fundamentalist terrorism have devastated Iraq. Despite being decimated, with its economy shattered, state collapsed and society torn asunder a new wave of mass protests is erupting from the womb of Iraq’s rubble. This renewed class struggle has arisen cutting across religious divisions and sectarian hatreds coarsening society. The US strategists, to dissipate the Iraqi population through the timeworn tactic of “divide and rule” had promoted divisive and macabre sectarianism.

Basra, once dubbed the “Venice of the Middle East” for its network of canals is now a socioeconomic disaster. Al-Abadi’s regime has desperately sought to quell the unprecedented protests through a combination of conciliatory rhetoric and brutal state repression. The protests began in Basra on July 8 when security forces fired on a demonstration of youth protesting against price-hikes, lack of employment and essential services, including water and electricity.

The recurring power outages and lack of clean drinking water have made life miserable for the city’s mostly working-class inhabitants during the sweltering summers. Power shortages were exacerbated this year by a drought, which significantly reduced power production at the nation’s hydroelectric dams, and by Iran’s large reduction of electricity supply for non-payment. Pervasive graft, unemployment and grossly inadequate public services have become defining features of Iraqi society since the US invasion and occupation.

These demonstrations have continued ever since, with thousands of protesters blocking traffic, attempting to seize oil fields and storming government buildings, after the regimes’ failure to improve their living standards since the fall of the Ba’athist regime. “Hundreds of people tried to storm a courthouse,” said a police official.

Basra Province is by far the country’s most oil-rich region. Its oil exports account for 95 per cent of annual revenue for the Iraqi government. Abadi ordered Iraq’s notorious Counter-Terrorism Service commandos to ‘defend’ oil fields in Basra. Internet access was terminated to disrupt the coordination of demonstrations.

The protests nonetheless gained further momentum. On Friday, demonstrators blocked access to the port of Umm Qasr, while the movement expanded to the cities of Amara, Nasiriya and Najaf, where several hundred protesters stormed the airport and brought air traffic to a halt. Security forces deployed at the airport shot and killed two more demonstrators, bringing the total to at least eight protesters killed during the revolt’s first week. These protests have already spread to Baghdad and the holy city of Karbala.

Iraq has the largest oil reserves in the world after Saudi Arabia, while its ordinary inhabitants still suffer from destitution and misery. In fact, prior to the war with Iran, which started in 1980, Iraq was close to a welfare state according to a UNDP report. Iraq has had a number of revolutionary uprisings in modern history.

In 1958, more than a million people were protesting on the streets of Baghdad expecting the Communist Party to lead a revolutionary insurrection. However, the British imposed monarchy was overthrown by a coup of the junior army officers of the Baath Socialist Party as the CP leaders vacillated to take power. In July 1968 Maj-Gen Ahmad Hassan Al-Baker overthrew the regime of Gen Abdel Rahman Arif in a coup d’état, which promised radical changes including the nationalisation of oil and commanding heights of the economy. This brought them close to a planned socialist economy, which gave a tremendous spurt to social development and improvement of the lives of the ordinary Iraqis.

A UN report described Iraq in the early 1980s as a country fast approaching living standards comparable to that of developed countries. An extensive and sophisticated health system was introduced. Clean and abundant drinking water was the norm. Advanced sewage treatment plants kept the water quality of the Tigris and Euphrates clean and a modern network of telecommunications was extended to urban and rural areas. Twenty-four electrical power generation stations were the key component of the infrastructure.

Urban and rural women were active in all sectors of the economy and government with a social freedom rarely witnessed elsewhere in the Middle East. Women’s education improved rapidly with free and compulsory education. However, dropout rates increased substantially after the Gulf war, US invasion and rise of violent Islamic bigotry. Before the imperialist invasion, there was not a trace of Islamic fundamentalist organisations that have since wreaked havoc on the country. Islamic fundamentalist terror has drastically turned the social, cultural and economic lives of women into a living hell. With the eight-year-long Iran-Iraq war (1980-1988), the two Gulf Wars, religious tyranny and imperialist invasions Iraq has gone from relative affluence into an abyss of massive poverty and conflagration.

But this new uprising on the class basis is a silver lining in the human tragedy and bloody turmoil that has plagued Iraq for decades. The states of Iraq, Lebanon, Libya, Syria, Yemen, and Libya that were carved out of the Levant province of the Ottoman Empire by the imperialist masters have crumbled. There is no possibility of restoring any development or prosperity through ‘aid’ of the imperialist financial institution or ‘world powers’ in Iraq or any of these artificial states created for plunder through the Sykes-Picot Treaty, Balfour Declaration and other treacherous deals between the victor imperialist powers after the First World War.

The present movement is a transformational landmark in the struggle of Iraqis for emancipation. When such a movement attains a revolutionary character it will not remain confined to Iraq but spread like a revolutionary storm in all countries of the Levant, the Middle East and far beyond. There will be ebbs and flows in the trajectory of this movement. But this uprising has proved yet again that even in the most arduous of conditions the youth and toiling masses can rise and smash all obstacles in their struggle for emancipation.