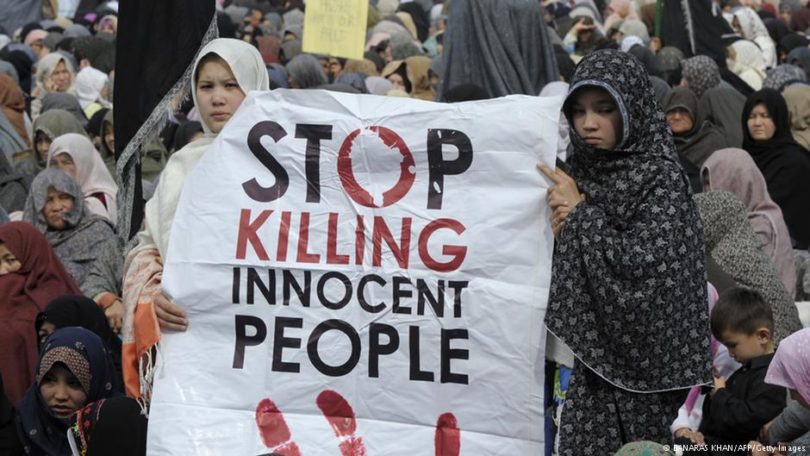 With the new wars between the sub-continental rival rulers seemingly being fought mainly in the electronic, print and social media rather than in the battlefields of the yore years the mayhem and killings of oppressed peoples in India and Pakistan are going on unabated. One of the communities that are victim to the bestial religious and sectarian genocide has been the Hazaras in Baluchistan being targeted for more than a decade. On Tuesday five women belonging to the Shia Hazara community were targeted and killed in most likely a sectarian-motivated gruesome murderous attack on Quetta’s Kirani Road on Tuesday. These women were returning from the city towards their secluded residential colony of Hazara Town when armed men intercepted the bus and one of them barged inside and started shooting indiscriminately. At present media that is overwhelmed by the war hysteria has undermined the news of this heinous assassination.

Such is the condition of state security for ordinary people of this tragic region that even after the Muharram procession, when security measures were claimed by the authorities of being tightened in Quetta and the state and government bureaucracy had already imposed section 144 and ban on more than one person of riding on motorcycles, this lethal attack took place. It took place inspite of the city administration having said to have had deployed extra personnel of Frontier Corps, police and other law enforcement agencies in and around Imambargahs and other places of worship. As is the usual routine, the prime minister in Islamabad and Baluchistan’s Chief Minister Nawab Sanaullah Zehri ‘strongly condemned the tragic incident’, sought a report and directed law enforcement agencies to ensure the arrest of perpetrators of the assault. The top state official had their regrets conveyed to the media by their spokesmen but once again the Hazaras were the victims of this sectarian vengeance with the regime having failed them yet again.

Although there have been increased and numerous sporadic attacks on people belonging to the Shia Hazara community particularly with the advent of the twenty-first century, the community has also been targets of huge massacres in the recent years. An English Pakistani newspaper recently gave a chronology of these genocidal attacks. It reported that on Feb 16, 2013, a bomb blast at a market in Hazara Town left 89 people dead. Before that 81 people were killed and 121 injured in suicide and car bomb blasts in Alamdar Road area in January 2013. The terrorists gunned down 26 people belonging to the community when they were travelling in a bus near Quetta on Sept 20, 2011. In September 2010, a suicide bombing during a Shia rally in Quetta killed around 50 people and injured many others. In March 2004, an Ashura procession was attacked in the city, which left 42 people dead and many injured. Most of the victims were Hazaras.

The earlier attacks were often claimed by the so-called Sunni subsect, calling itself Lakshar-e-Jhangvi (LeJ), a Pakistani-Taliban-affiliated organization that considered Shia’s as heretics and their killing as a pious religious act. After the last attack this summer Interior Minister Chaudhry Nisar Ali Khan responded  by banning Shia pilgrims from travelling by road between Quetta and the Iranian border, saying it was impossible to “fully secure” the route. Now will he ban the Hazaras from even travelling less than five kilometres to the Quetta city for their groceries? This shows the mindset and impotence of our ruling elite in power.

There has been widespread sectarian violence between Pakistan’s different Sunni sects and Shia groups for long. But in the past five years groups including Jaish–ul-Islam and the LeJ have launched and executed sectarian terrorist acts in an increasingly brutal campaign. Baluchistan has become one of the epicentres of this slaughter. However Baluchistan has the least record of sectarian killings in the past. Sectarian violence has only recently raised its head in Baluchistan. Sectarian violence is also used as a tool to crush the national and separatist movements of Baluch youth.  After the U.S. aggression and occupation of Afghanistan in 2001, Baluchistan’s Hazara community has bled and maimed by this Islamic sectarian butchery. More than 500 Hazara have been killed in the sectarian attacks in Quetta and its surroundings since 2008.

Terrorist attacks in January and February 2013 by islamic sectarian vigilantes against the Hazaras in Quetta, which is home to half a million of this community, resulted in the highest number of people killed in individual terrorist acts of sectarian violence in Pakistan since the country’s inception and the bloody partition in 1947.  After these acts of sectarian killings there are rigorous ‘operations’, which according to many activists target Baluch separatist and political workers. Sectarian outfits have largely been scot-free.

A Human Rights Watch (HRW) report paints a grim picture of the regimes and the authorities, “The Pakistani government’s response to this violence suggests incompetence, indifference, or possible complicity by security forces and other state personnel with the extremists. Authorities have failed to apprehend or prosecute members of militant groups, including the LeJ, that have claimed responsibility for such attacks. While Pakistan and Baluchistan authorities claim to have arrested dozens of suspects linked to attacks against Shia since 2008, only a handful has been actually charged with any crimes.”

That casual and incapacity culture of the regimes and constant fear in their daily lives has traumatized the Hazara population. Such conditions of extreme insecurity have practically ghettoized them. Since 2012, Quetta’s Hazara have been forced to restrict their lives, routine and activities to the mainly Hazara neighbourhoods of Marriabad and Hazara Town. That has imposed increasing economic hardship on the community and limited their freedom of movement and safe access to education. It’s not an accident that the Hazaras, mainly the youth are trying to get out from this suffocating isolation, enduring painful economic hardships and social/cultural privation. Most have fled and are in a continuum escaping Pakistan to seek refuge in countries as far away as Australia.

However the plight of the Hazaras as a targeted community has worsened. This relentless spate of killings and maiming of the Hazaras for such a long period of time has had severe psychological and social traumas on the community. A malaise, a painful indifference has set in the psyche of the community. But now there are serious questions of an existential threat to the individuals and the community. Putting aside Modi’s rhetoric, which was more damaging for the people of Baluchistan that to anyone else, just to blame proxy wars and other official clarifications are not enough for the inhabitants of the region. In general, there is an increased questioning in the minds of the people of Pakistan’s most underdeveloped and poorest province.

There has been a history of alienation and isolation of the region. Pakistan was created on 14 August 1947 but until 29 March 1949 Khanate of Kalat was a separate princely state. Ever since the region has been in turmoil and conflict that often turned bloody. With the discovery of the huge reserves of minerals including gold and silver have had the effect of imperialist vultures international and regional pounced upon the region for naked plunder of its resources. The alienation and sentiments of national and socioeconomic deprivation along with revulsion against the increased exploitation have aggravated. The relatively less violence in Punjab and others regions along with the increase in sectarian, national and class oppression is creating a revolting psychology particularly amongst the youth. But inspite of difference in degrees and violence this exploitation is rising in the whole of south Asia and beyond. The struggle against religious, sectarian, nationalist and gender issues has to be united in a collective struggle. This unity can only be forged on a class basis. It’s only the victory of the class struggle that can defeat and obliterate the cruel perpetrators of these heinous crimes against the oppressed human kind.