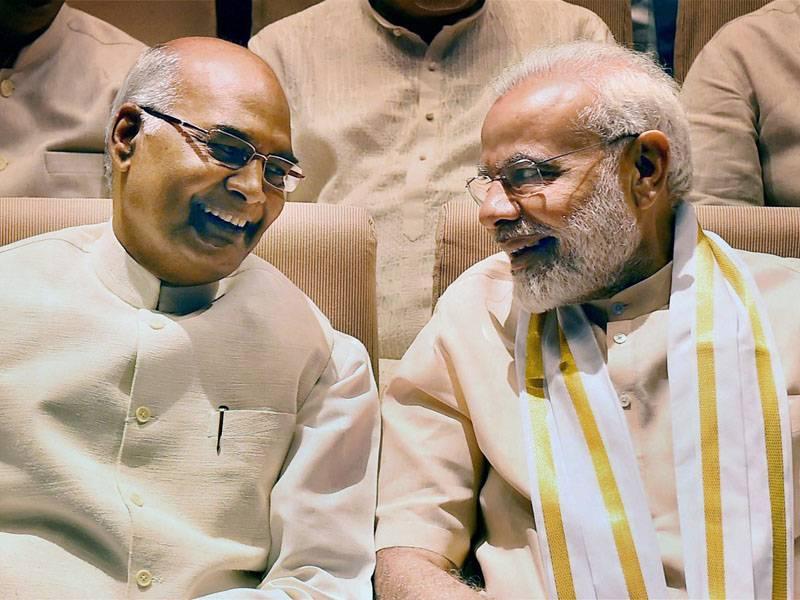 With the election of Ram Nath Kovind as India’s President and Venkaiah Naidu as the vice president, frenetic religiosity has grabbed the ‘largest democracy’ in the world. Since the communal partition in 1947, it is for the first time the RSS-BJP’s Hindutva chauvinists are holding all the three top political posts, the President, Vice President and the Prime Ministership. The BJP has over two-thirds majority in the Lok Sabha and is governing in 17 of India’s 29 states.

Inciting communal hatreds and religious biases has been the most favoured tool of the subcontinent’s ruling classes to perpetuate their oppressive rule. The British imperialists perfected this pernicious act since the 19th century culminating into the bloody partition of South Asia. Millions perished in the communal slaughter unleashed by religious loathing incited by the Hindu and Muslim elites to crush the revolutionary movement that had erupted in 1946. They were terrified of the prospect of the national liberation struggle metamorphosing into a socialist insurrection threatening the vested interests of the imperialists and the native bourgeois.

The father of post partition India Mohandas Karamchand Gandhi was a Hindutva chauvinistic disguised as a passive saint. Dilip Hero in his recent book, The Longest August, writes, “ When push came to shove, Gandhi invoked Hinduism… a quarter century later, his injection of religion into politics would lead to undermining the unity of Indian subcontinent… Gandhi drew much of his nationalist inspiration from the traditional myths, beliefs and symbols of Hinduism.” In early 1922 Gandhi had remarked, “Those who say that religion has nothing to do with politics do not know what religion means… My bent is not political but religious. And I take part in politics because I feel there is no department of life that can be discovered from religion.” Gandhi asserted that Cow protection is the outward form of Hinduism, “I refuse to call anyone a Hindu if he is not willing to lay down his life for this cause. It is dearer to me than my very life.”

A cursory look of what is taking place in India under the BJP today, it seems that Modi’s policies and other reactionary acts of the Hindutva vigilantes are not that far from the ideologies possessed by Gandhi, so much eulogised in India and the west. More importantly, Gandhi was an ardent supporter of the property ownership and capitalist order. Modi’s real motives are no different. He uses religious nationalism to implement the aggressive neoliberal capitalist onslaught for the profits of imperialists and native corporate bosses.

In India and internationally the Dalit background of the newly elected president is being cynically exaggerated. The caste prejudices in India today were non-existent in caste origins based on the division of labour in the pre-medieval ages. It has morphed into a convulsed social discrimination but it’s not the fundament contradiction of present day Indian society. There is a crushing domination of distorted and caricatured capitalist relations. To counter-pose caste conflict against the class struggle as a means of emancipation is not only fallacious but in the last analysis, it becomes a reactionary notion and ideology that can be easily manipulated by the ruling classes and the state to fracture class unity.

India’s first Dalit president was K.R. Narayanan from 1997 till 2002. His presidency was no relief for the impoverished masses of the lowest castes. Some of the richest and the mightiest in India are from the lowest castes amongst top layers of the bourgeoisie. Today India’s president, the vice president and the prime minister are all from the lower castes. Has it made any difference in the lives of the oppressed castes? Under Narendra Modi, the oppressed masses comprising of all castes are exploited and coerced on the basis of their class.

Poverty and deprivation know no castes or nations; the rich inflict them upon the impoverished classes. It is also true that the lowest castes, women, national and religious minorities suffer double or triple exploitation. But this does not mean that they can get any liberation on the basis of caste actions and protective laws for lower castes. Their misery has not reduced with all the constitutional reforms and clauses. The Mandal commission reforms proved to be a futile exercise.

India has the highest concentration of poverty in the world. A vast majority of its 1.23 billion populace is forced to live in absolute poverty and squalor. India has a gruesome record on rape with 40,000 rape cases reported every year. Almost sixty percent of the children have stunted growth. Unemployment is rising at about ten million a year. Safe drinking water, functional sewage infrastructure, uninterrupted electricity, decent health care and education are available to only those in the top strata of the society. Its democracy is of the rich, for the rich and by the rich.

The Indian ruling class has failed to develop a modern and united nation state. It’s a vulgar parvenus class, a parasitic bourgeoisie that failed to shake off the reactionary mores of the Dark Ages—black magic, communal aversions and superstition loom large in society. The conditions in the other countries of south Asia partitioned by the British imperialists are no different.

Most opposition parties in India have been obsessed with secularism, democracy and constitutionalism. Congress and the other secular national and regional parties have failed to address the basic issues tormenting the Indian masses. Tragically the Communist and other left parties are treading the same path of secularist politics and sustaining  ‘bourgeois democratic’ status quo. The more secularism is enunciated the more Hindutva chauvinism escalates. India’s large Communist parties have shrivelled with an enormous decline of their social base. Their leaderships’ refusal to present a revolutionary socialist alternative has disappointed the working classes and the youth. Workers strikes, students’ revolts and movements of the oppressed are erupting incessantly. The two general strikes in the last two years proved the revolutionary potential of the Indian proletariat.

These sporadic rebellions can at some moment galvanise a mass upheaval creating a revolutionary situation. Socioeconomic transformation requires a revolutionary party to guide one-fifth of humanity to liberation and a socialist victory.