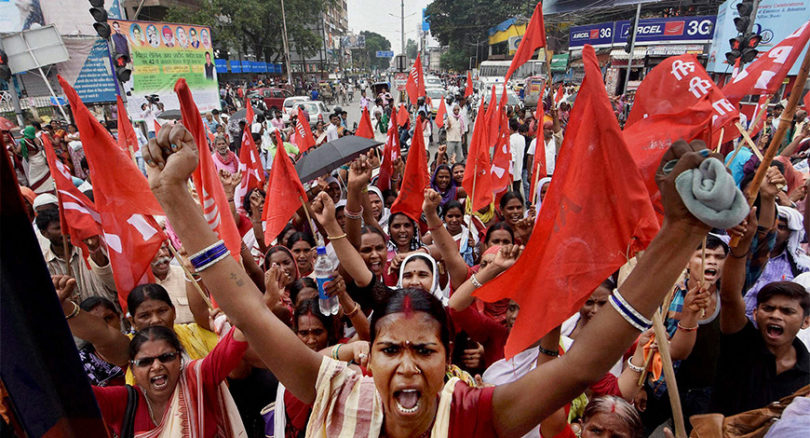 Indian workers mainly organized in 10 central trade unions called for massive nationwide protests on July 3rd against alleged anti-worker and anti-people policies of the government. The joint statement issued by unions reads, “after the observance of the Nationwide Protest Day, a concrete form of non-cooperation and defiance, including a nationwide general strike, will be decided by the joint platform of Central Trade Unions and independent Federations and Associations at an appropriate time”. This will be the second Nationwide Protest Day during the pandemic. As unions held successful protests on 22nd May against Modi Sarkar’s draconian policies. Despite lockdowns owing to COVID-19, protests were observed from Delhi to North Bengal and millions participated in this one-day nationwide protest.

The COVID-19 viciously exposed underlining contradictions of Indian capitalism. Rich were effectively saved from the pandemic and economic crisis whereas millions of poor were left at their own. The government stood up with big corporations and the corporate sector. According to the International Labour Organization, informal economy in India still accounts for more than 80 per cent of non-agricultural employment and Govt attitude towards them caused immense miseries to millions of these workers. As Trade Unions claim, “The jobless are more than 14 crore and if the daily wagers, contract and casual workers are added, the number swells up to more than 24 crores who are out of livelihood at present.” Even during pandemic capitalists saw wealth soaring and India is one of the countries where the gap between poor and rich is increasing at an exponential rate. As 10 per cent of the Indian population holds 77 per cent of the total national wealth on the other hand it would take 941 years to earn what a top executive earns. The health sector is in crumbling condition, although in the recent year India is regarded among top destination for medical tourism, the healthcare is considered as a luxury for the vast population. As per Oxfam, almost two people every second are pushed into poverty due to costs of health facilities.

After pandemic, several states including Maharashtra, Madhya Pradesh, Haryana, Uttarakhand, Himachal Pradesh, Uttar Pradesh and Gujarat recently issued ordinance and notification containing big exceptions for capitalists from labour laws. This means the suspension of labour laws and various protections for the working class. In other meaning throwing workers back to slavery. States claims that these are temporary relief given to uplift economy however actually these are blank cheques which are being handed over to bosses. Now workers will no longer have the right to break, workplace safety, form or join a union and mostly important extension a factory worker’s daily shift to 12 hours per day, six days a week (72 hours) from the existing eight hours per day, six days a week (48 hours). The 8 hours working day was the result of the centuries-old struggle of the workers against the capitalists. 1886 Chicago martyrs were demanding 8 hours but now modern capitalism is pushing workers far away even from 1886 demand. Government Ministers are defending these controversial laws by saying it is need of the hour to give concession to the industrial establishment. It again reminds Karl Marx when he said, “Capitalist production, therefore, drives, by its inherent nature, towards the appropriation of labour throughout the whole of the 24 hours in the day”.

Alongside relaxing laws for capitalists, a hefty $270 billion stimulus package equal to 10 per cent of Indian GDP also announced. A large pie shares this package is again for big capitalists in form of tax breaks, interest-free loans and relief in already taken loans etc. A small portion of this will be spent on ordinary people. Union’s Financial Minister Nirmala Sitharaman defended this package by saying, “There is no free lunch”. Meanwhile, Modi’s government is pushing ahead with a lavish INR20,000 crore project to build a new parliament building and redesign New Delhi’s Central Vista which even Rajya Sabha is not supporting. Modi is also aggressively acting upon neoliberal agenda of imperialist financial institutes. On the name of “restructuring,” massive privatization is underway. It may be called historically largest privatization program in modern history, eight critical sectors like Coal, Minerals, Defense Production, Airspace management, Social Infrastructure Projects, Power distribution companies, Space sectors and Atomic Energy are going to open for the private sector. First time in the history of India, Government is going to promote commercial mining of coal. Increase of up to 74 per cent in FDI in Defense production, more opening of airspace for private airlines and privatizing Air India. Privatization of electricity distribution companies and boosting private sector investments in social infrastructure also included. It simply means putting more stretch on already crumbling pockets of ordinary people.

On the other hand, India is passing through the worst period. The capitalists are being gratified through massive bailouts whereas poor are perishing. This is another way of scorching already bleeding wounds of the poor. Even during lockdowns, it was poor and workers who suffered more and middle class and rich kept on banging plates to salute frontline warrior from their comfort and luxury quarantine. COVID-19 has viciously exposed India’s crony capitalism. Even in this crisis, the rich saw their income rising while in quarantine and poor on-road left with no choice. The Centre for Monitoring of the Indian Economy for India recently indicated that nearly a quarter (24 per cent) of India’s workforce is now out of gainful work. Statistics released by indicating that, a precipitous rise in unemployment from already record levels of 8 per cent. According to its April estimates over 122 million people in India lost their jobs and Around 75 per cent of them were small traders and wage-labourers. Capitalists are putting all weight of crisis on workers shoulder, there are massive layoffs are going on. “We are receiving more than 200 complaints every day regarding non-payment of salaries on the online grievance cell, said Deputy Labour Commissioner PK Singh of UP. He cautioned that “Once lockdown is removed and the situation improves, there will be a flood of such complaints. We have sought directions from the government in such cases.” Its just case of a single district from UP and in whole India numbers are much higher than previously thought by Government Officials.

The unplanned and sudden lockdown announcement was like bolt light on millions of migrant workers. Without any adequate relief or arrangements for them, they were stuck in cities. Many decided to walk to their homes thus we got many workers died in road accidents. Some analysts compare the scale of migration to 1947 when without food or money millions had to travel long distances on bare feet. Their misery did not end here but migrant workers were subject to torture and detention by Police as well. Like during demonetarization, according to a conservative estimate of more than 100 million (some estimates suggest up to 140) informal workers sufferer the worst. This migrant labour crisis exposed the structural forces of disruption that are part of India’s uneven and combined economic growth. Industrial development of India has been reduced very few areas and a large population is yet to benefit from this development. Indian journalist Shikha Mukherjee quoted some labour Statistic in her piece published in The Wire that, “Of the 93 per cent working in the unorganized sector, 30 per cent are regularly employed, the remaining 70 per cent are on contracts. Of these, 71 per cent had no written contracts, 54.2 per cent were not eligible for paid leave and 49.6 per cent had no social security benefit.” This exposes the fragility of Indian capitalism whose foundations are built on the exploitation of the working class.

Rural India is among the most affected part, owing to unplanned lockdowns without proper access to market now farmers are throwing their crops on road. Crops rates are much lower than its production costs. The low cycle monsoon, Locust attacks and Cyclone are adding miseries for farmers. Farmers are under heavy debts and can’t afford to manage food for their families. The suicide rate is on the rise among them, these are reasons that following steps of trade unions, All India Kisan Sabha – a body of 200 peasant organization has given a call for agitation on 27th May. The relief announced for farmers is actually for large scale producers and who are walking to their homes will not get the benefit for it.

Modi Sarkar is fostering its religious bigotry. Although Modi and the BJP are drenched in a quagmire of massive corruption scandals, Hindu-Muslim card still played in the social and political arena. Many of Jamia Millia students were arrested and put in jail during the lockdown. Seduction charges registered against them and a crackdown have been initiated against students’ leaders to protest against the CAA and the NRC. The same autocracy is being repeated at Kashmir and another part of India. Where dissents voices are being silenced on the pretext of COVID-19 emergency. While BJP and Congress are bullying over non-issues and real issue of economic salvation and relief for poor remain out of question. All bourgeois parties from Congress to BJP has been repletely exposed many times. Same goes for Communist parties, who instead of giving a proper line of action are resorting to standing by protests only. At the start of this year on 8th January 2020, nearly 250 million workers across India went on a 24-hour long general strike. At the same time, whole India was engulfed by Anti-CAA & NRC protest but each Communist leadership was failed to connect both movements thus giving an upper hand to Modi Sarkar.

As we are now also witnessing spontaneous emergence of working-class, as far as rural India. Even at many places, there were no union official or the member was present but owning to conditions workers themselves came to protest. The protest against gave impetus to class solidarity and action across the board and send brave message to all workers of the world that in these situations we can fight and strive for change. Indian working class have again and again proved its potential to overthrow the yoke of capitalism but always leadership don’t have a concrete action plan. Indian working-class are again and again pouring on the roads and express their anger to this system. The mighty working class is awakening and Modi Sarkar’s counter-revolution is effectively playing the role of a whip of counter-revolution. The effects of this mighty awakening will not confine within borders of India but it will spread throughout subcontinent.

We send our heartiest solidarity to the Indian workers, our injuries are the same, our sufferings are the same as we both are victims of the current evil system. We are bonded with a common bond – that’s the bond of class. This bond is superior to any religion, race or language.