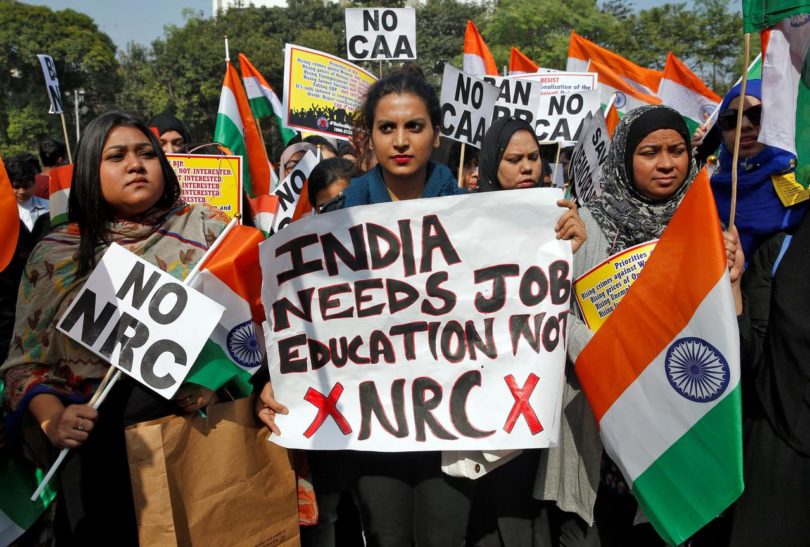 The protests in India, against the Islamophobic new citizenship law called CAA (Citizenship Amendment Act), have entered in the fourth week. The law, which offers citizenship to non Muslim religious minorities persecuted in three Muslim majority countries, namely Pakistan, Afghanistan and Bangladesh, has sparked a heated debate as to why the Muslim migrants have been specifically excluded from obtaining citizenship. The situation got inflamed when the interior minister Amit Shah announced in his parliamentary speech of holding a nationwide NRC (National Register of Citizens) to identify the infiltrator i.e. illegal immigrants, as was done in Assam in 2013 which, after completion, left 1.9 million people stateless and stripped of their Indian citizenship overnight and consequently they were sent to detention camps. Under the imminent NRC, the people are required to provide documentary evidence of their Indian ancestry otherwise they could be stripped of their citizenship and end up in detention camps. This has caused widespread fears among Muslims who according to Hindutva ideology are the descendents of Arab invaders and thus outsiders.

The CAA or Citizenship Amendment Act was passed from both houses of parliament on 11th December. The new amendment grants speedy citizenship to all those non-Muslim immigrants from Pakistan, Afghanistan and Bangladesh who have arrived in India on or before 31st December, 2014. This amendment has also reduced the residence requirement for naturalization from 11 years to 5 years. The protests had begun even before it was presented in parliament for deliberations on 4th of December, the day it was approved by the Union Cabinet. The first protest broke out in Assam where there is a long standing illegal immigration issue which at times turned into violent movements. The Assamese are against granting citizenship to any illegal immigrant (mostly from Bangladesh) irrespective of their religion or ethnicity. They fear their cultural identity, political rights and economic opportunities would be infringed. The protests in the rest of the country are directed more against the NRC than the CAA where many think the law could be used to segregate the Muslims given the track record of BJP.

On December 14th, thousands of people gathered on New Delhi’s Jantar Mantar road to protest against CAA. Jamia Millia Islamia students marched from the university campus to Parliament in protest against the law. The next day the police forcefully entered the Jamia Millia Islamia university campus, thrashed and tear gassed the students. More than 200 students were injured and 100 were detained. The video of Delhi police thrashing a student went viral which evoked widespread condemnation across the country. In Dharavi, Mumbai, hundreds of thousands of people demonstrated against CAA/NRC. Huge protests were held in Bangalaru, Karnataka, Hyderabad, Kolkatta and many other cities.

Protests were also held in different cities of Uttar Pradesh which turned violent with police firing live rounds and tear gas canisters. Here the state repression against the protesters has been the most ruthless. So far, more than two dozen have been killed by police shots and hundreds detained. Those detained are being asked to submit their property papers to get released. The Chief Minister of UP, Yogi Adityanath, is a Hindu fundamentalist extremist and his anti Muslim rhetoric is no secret. His government gave free rein to the police who entered the houses of protesters (mainly Muslims), thrashing and vandalizing their properties. The Muslim neighborhoods are being specifically targeted. People, especially the Muslims are being arbitrarily arrested. Notices are being issued to people to pay for the damages of properties during protests, as Harsh Mander wrote in the India daily The Hindu;

“Muslim people have received notices to pay high damages for alleged destruction of public property (which includes even police batons broken while beating people) – without any judicial finding, as required by law, to prove their responsibility for destroying the properties.”

On the face of it, it is just CAA /NRC which triggered the recent unprecedented waves of protests across the country. However, the problem runs deeper. The neo liberal economic recipe for higher growth rates has always been a disaster for the poor in countries like India. Until recently India was the fastest growing economy in the world. Even under Congress’ Manmohan Singh government India had one of the highest growth rates in the entire globe. Then why did Congress lost elections in 2014? The reason is the contradiction between higher growth rates and the deprivation of masses from the “fruits” of these growth rates.

It was recently revealed that the data regarding India’s GDP growth had largely been manipulated. Lately, Arvind Subramanian, who was Indian government’s chief economic advisor from 2014 to 2018, published his research paper titled, “India’s GDP Mis-estimation: Likelihood, Magnitudes, Mechanisms, and Implication”. In the same paper he claimed that India’s GDP growth had been overestimated during the period 2011-2017. He said that Indian government had changed the way it measured growth which resulted in GDP growth rate overstated by 2.5 percent annually. As per his estimates the annual growth rate between the years 2011 to 2017 was 4.5 per cent against the officially announced 7 percent. Arvind also stated that his findings may answer the country’s “jobless growth” conundrum.

Now the Indian economy’s house of cards is falling apart. Data released at the end of November 2019 shows Indian economy grew by a meager 4.5 percent between July and September. It is the sixth consecutive quarter of slow growth. A bad omen indeed! Unemployment is raging. According to National Sample Survey Office’s (NSSO’s) periodic labour force survey, unemployment rate is 6.1 percent. While as per estimates of CMIE the jobless rate rose to 7.51 percent in July 2019. Either way it is the highest in the last 40 years! According to a study by K.P. Kannan and G. Raveendran published in the Economic and Political Weekly, India lost 6.2 million jobs between 2011-12 and 2017-18. Most of these losses were in agriculture, quarrying, mining and manufacturing. Indian Auto sector is also in deep crisis which directly and indirectly employs 35 million people. Recently the sector laid off about 350,000 workers. Thus India’s economic growth has transformed from being “jobless” to “job-loss”. The crisis is so severe that in August 2019, the famous entrepreneur VG Siddhartha, the founder and owner of Café Coffee Day, committed suicide due to “unmanageable debt, slowing growth and alleged harassment by tax authorities”.

In the absence of a viable economic growth, prosperity and employment the ruling class resorts to extra ordinary steps to maintain its grip on society. The Indian ruling classes are the brightest pupils of their former British colonial masters who taught them the age-old prescription of ruler-ship i.e. divide and rule. Ever since Modi led BJP came to power, India has been engulfed by an atmosphere of Hindutva hatred towards religious minorities, especially Muslims. Mob lynching of Muslims and lower caste Hindus over beef eating has become order of the day. Modi’s government utterly failed in bringing Vikas (development) and Ache Din (Good days).

Consequently, they are diverting people’s attention towards non-issues of building Ram Mandir, banning beef eating and more recently CAA and NRC. The way CAA was promulgated clearly exposed the wiliness of the Indian elite. According to a report by Indian Intelligence Bureau, the immediate beneficiaries of the law will be 25,447 Hindus, 5,807 Sikhs, 55 Christians, 2 Buddhists and 2 Parsis. These illegal immigrants could also be adjusted under the existing laws. There was no need to make it an election agenda and pass a law for a couple of thousand of people in a country of 1.2 billion people. But the real purpose was to wedge a cleavage on religious lines by consciously excluding the Muslims from the purview of the law and declaring that the CAA would complete the “unfinished tasks of partition” i.e. to kick out the Muslims to Pakistan.

On the other hand, once the NRC is carried out, people would be required to prove their citizenship by providing documentary evidence. People would be needlessly entangled in futile activity. Employment, food, shelter, medical facilities and all basic necessities of life would take the back seat. Of course the Muslims would be particularly targeted as the Hindutva organizations consider them less Indian and more outsiders.

But things didn’t go as Modi and his gang had envisaged. The students of Delhi’s prestigious Jawaharlal Nehru University were already protesting against the fee hikes days before the eruption of anti CAA/NRC protests. After the ratification of CAA by parliament, the Indian youth erupted. The two movements merged and became a nationwide protest against the citizenship law. Instead of religious division the new law became an impetus for religious harmony. Students and youth from all religious background pour onto the streets to protest against the CAA/NRC and the Hindutva ideology of hatred at large. Lesser known Bollywood stars also joined the protest movement.

One of the hallmarks of these protests has been the rejection of Hindutva ideology by the Indian youth. They came on the streets in defiance of the Hindu-Muslim divide propagated by BJP and its Hindutva allied organizations. Numerous videos on social media have emerged in which young Hindu students could be seen condemning the communal Amendment and showing solidarity with their Muslim countryman. In a video widely circulated on social, an apparently Hindu girl is seen as protesting against the CAA. She said, “We don’t believe in any caste, creed or religion. Half of our friends are Hindu and other half is Muslim. That doesn’t matter. If they try to divide us in the name of religion then I am also a Muslim. I will convert. If you lock up any of my Muslim friend in detention centre then I will also go to the detention centre.”

The movement of the Indian youth against religious bigotry coincides with the resurgent students’ movement in Pakistan. After years of repression the students in Pakistan are raising their heads for the restoration of Students’ Union. In the run up to the Students’ Solidarity March of November 29th, a revolutionary poem of an Indian poet Bismil Azimabadi, Sarfaroshi Ki Tamanna Ab hamare Dil mei hay (The desire for struggle is in our hearts) became very popular in Pakistan. On the other side of the border a poem by Pakistani revolutionary poet Faiz Ahmed Faiz, Hum Dekhenge (We will witness) became very popular in the anti-CAA/NRC protests. This single show of solidarity and unity alone prove the absurdity of religious partition of Indian subcontinent back in 1947.

The organic crisis of capitalism on a world scale is devastating the lives of millions of innocent souls. The ruling classes around the world are under immense pressure to contain the crisis and perpetuate their rule. All the old recipes of ruler-ship are falling apart. The Indian rulers have always used religion as a tool of their oppression. But this is no more working. People are fed-up. The recent protest movements in India and the students’ march in Pakistan are the first stirrings of a future mass movement. These initial protests in India have out-rightly rejected the partition of Indian subcontinent. The future mass movement in India or Pakistan will obliterate these borders in a jiffy. There can’t be two separate revolutions in Pakistan and India. A victorious socialist revolution in any of the country will immediately engulf the other. Only such a revolution can undo the partition and create a society of harmony, abundance and prosperity.