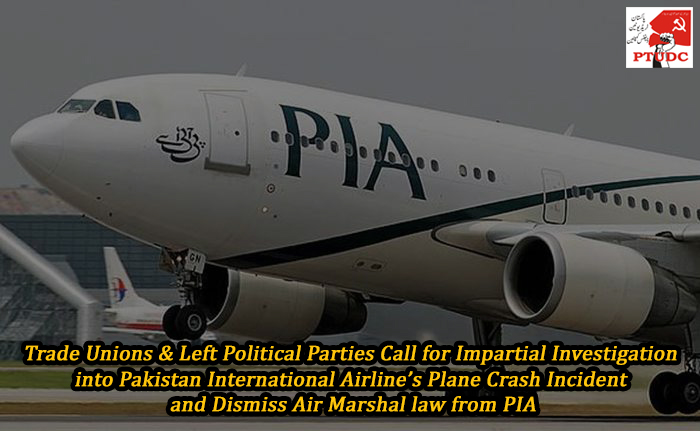 We stress upon the importance of initial media reports that the incident took place over a technical fault. We point towards how the transmission of the pilot’s final exchange with air traffic control also indicates that he failed to land due to a technical fault. For a long time, Pakistan Airlines’ Pilots Association (PALPA) has been raising its concerns regarding the working conditions of the ground staff and flight crew. The management has been, however, showing consistent negligence towards ensuring adequate safety measures for the PIA staff.

We also express concern about the fact that a large number of PIA staff consists of daily wagers and contractual workers. Not only are these workers deprived of basic rights i.e. basic income, medical facilities, EOBI and other employee benefits, but also no real attention is paid to their training. Similarly, layoffs are also increasing – in the last one year alone, 1,000 workers were fired at the stroke of a pen. For a long time now, terrible exploitation of workers is underway in the name of restructuring and cost-cutting. In fact, like various public service entities, the path for PIA’s privatisation is also being paved through the forced and well-organised bankruptcy of these institutions. As a result, workers are being thrust into chronic unemployment and poverty. We believe workers should be given their due rights.

Again, the blame of the tragic crash is being pinned on engineering workers and pilots while the real culprits in the management and the ministry associated with the airline are enjoying a luxurious life. These workers and low-ranking officers are simply scapegoats. There was a time when the PIA was a profitable institution that assisted in building many top-class international airlines. Now, after it has been brought to the point of doom, the responsible officials are enjoying their perks while all the blame is being shifted on to the working staff of the airline. The reality is that the ruling class has long been making attempts at destroying the PIA through nepotistic appointments of inept officials, no matter which section of the ruling class sits in the Centre. Not only has the ruling class minted quite some money in this manner, but it has also been thus paving the way for the PIA’s privatisation. All those sectors of the institution that were lucrative were sold for peanuts to private entities – not just its core services but its human resources and profitable routes have also been outsourced to private contractors. Unprofessional and incompetent officials, many of whom do not even have the experience of commercial flight operations, have been installed in top management positions. In the past, we have seen protests from PALPA and other workers’ organisations of the PIA for addressing the inadequate safety measures in place at the PIA, but these voices of dissent were effectively silenced through the imposition of the Essential Services Act 1952.

We believe that the current and previous governments are to be held accountable for the tragic plane crash as they led to the bankruptcy of the airline to justify their privatisation attempts. We also express our reservation on the Special Investigation Board (SIB), which again comprises the same people who are responsible for this tragedy. Civil Aviation Authority is responsible for ensuring safe air travel in Pakistan. However, the ineptitude of this department is evident through numbers. According to the International Civil Aviation Organization, Pakistan’s rate of accidents in a million departures is 29.25, which is the highest in the world. Pakistan aviation has had a spotty safety record with several incidents in the past decade, including a fatal crash. But investigation reports of these incidents, including that of the PIA aircraft ATR42-500 (PK-661) incident, never made to the public.

We demand that the International Civil Aviation Organization, International Federation of Air Line Pilots’ Associations, IATA, PALPA and other workers associated with the airline and aviation sector form a high-level commission. To ensure a partial inquiry, we demand that the chairman and CEO of PIA, Air Marshal Arshad Malik, the chairman of Civil Aviation, Hassan Nasir Jami, Civil Aviation Additional DG Air Marshal Ashraf Bhatti and Federal Minister for Aviation Ghulam Sarwar Khan be immediately dismissed and listed in the investigations. Instead of paving the way for privatisation of the PIA, policies to weaken public institutions should be abandoned and all pubic-sector workers should be regularised with permanent employment and provided adequate training. This is the only way to strengthen the public services sector.

We deem all the measures taken by the government inadequate and anti-working class. To ensure the safety of air travel and the protection of lives, we demand: