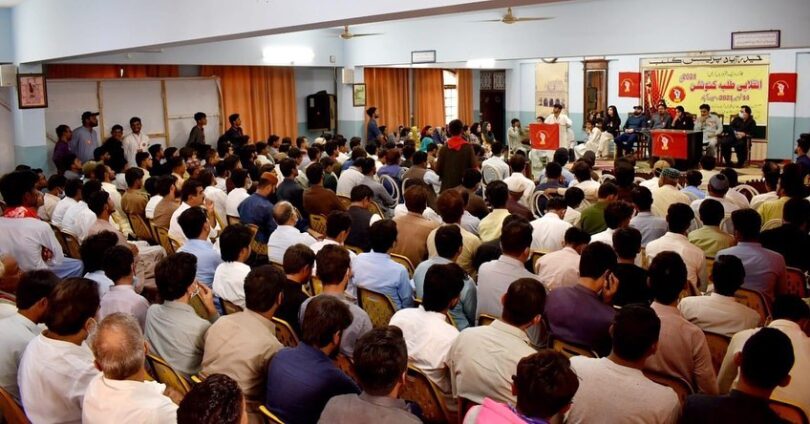 The Revolutionary Students Front (RSF) organized a ‘Revolutionary Students Convention’ at Press Club Auditorium, Hyderabad, in which a large number of students from different universities and colleges participated. The convention was presided over by Awais Qarni, Central Organizer of RSF, while the special guest was Khalil Babar, Central President of Jammu Kashmir National Students Federation (JKNSF).

RSF Central Organizer, Awais Qarni, RSF North Punjab Organizer, Omer Abdullah, RSF Karachi organizers, Hatim Baloch and Fayaz Chandio, RSF Dadu organizer, Sajjad Jamali, Sindh University organizers Faisal Mastoi and Sehar Pirzado, RSF Hyderabad organizers Sohail Chandio, Rameez Misrani, Nawab Chandio, Imran Kumbhar, Moazam Khoso, Zara Hussain, PPP Karachi leader Riaz Hussain Baloch, leader of Pakistan Trade Union Defence Campaign (PTUDC) Akbar Memon, Sarang Jam and JKNSF President Khalil Babar addressed the convention. They said that today students are suffering from serious problems. Capitalism has turned education into a commodity. Government’s allocated budget for education is already extremely low and further cuts are being made in the budget for education which has led to increase in fees every year. Incidents of sexual harassment in educational institutions are on the rise and the bullying of the administration in the name of discipline has damaged the self-esteem of the students. At the cost of millions of rupees and after going through tortuous competition, the students who are successful in completing their education do not get any employment opportunities. Zia ul Haq banned the students unions and they are still banned. Under a conscious plan students are kept away from all political activities and ideological debates so that they may neither raise their voice for their rights nor challenge this exploitative system. But we believe that these atrocities are not our destiny and by being organized and mobilized on the basis of a revolutionary ideology, students can not only snatch their rights but also work with the working class to overthrow this whole system based on the profit maximization and in which only a handful of people control all the wealth and resources. The speakers also condemned the unlawful arrest of Marxist Member National Assembly, Ali Wazir and demanded his immediate release.

Prior to the convention, a rally was organized from Old Campus Sindh University to Hyderabad Press Club for the “Restoration of Students Union” in which students from different institutes participated. Protesters held banners and placards with slogans against expensive education, privatization and harassment, and for the restoration of student unions. Demonstrators demanded justice for thr Nazim Jokhio, while slogans were also raised against Capitalism. The protestors demanded immediate restoration of student unions and holding of elections for student representatives in all educational institutions, provision of better and free transport facilities in universities, increase in the number of hostels, provision of basic facilities to students, reduction in fees, end to the privatization policy of education, nationalization of all private institutions. 10 times increase in the budget for education, special harassment committees to be formed with the representation of students, women should be provided equal opportunities in every field, the state should provide equal opportunities to everyone. The state should provide decent employment or at least Rs. 20,000 unemployment allowance to everyone able and willing to work. The agenda of indoctrinating students with reactionary and conservative material in the curriculum should be stopped, and the education system should be reorganized on modern scientific lines, all kinds of national deprivation, prejudice and oppression should be eliminated, equip students with revolutionary ideas and make them active part of the struggle for socialist revolution against capitalism.