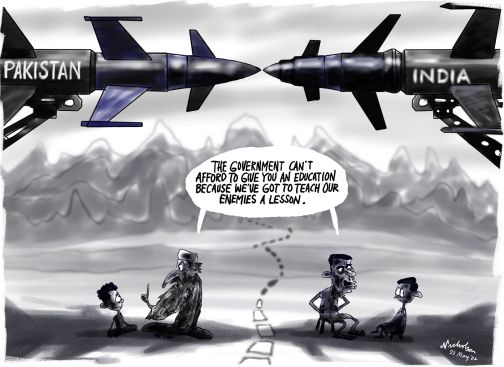 The relentless and remorseless orgy of killings, maiming and military occupation and oppression by the tyrannical Indian state exposes the internal frailty and organic decay of the ruling elite and military’s top brass. The political pundits and the elite are lauding Nawaz Sharif’s speech at the general assembly but what difference did it or can it really make? The UNO throughout its 70 years of history has proved to be a useless gadget of imperialist imposition that cannot move an inch to resolve Kashmir or any other real issue. Pakistani and Indian ruling elites’ slanging match at the UN General Assembly was a meaningless façade. The corporate media is spitting the fire of chauvinism and xenophobia. The Uri attack has failed to sustain attention in these rapidly changing news issues. But one thing is certain that the uprising of the defiant Kashmiri youth has rattled the establishment in Delhi.

The frustrations of the bigoted Indian Hindutva rulers are palpable as they are craving to resolve this issue through war, but the scenario of a nuclear holocaust and economic interests of corporate capital impede their lust for a bloody conflagration. The option of going to another full-fledged war with Pakistan is suicidal. Narendra Modi has been whipping up war hysteria to perpetuate his exploitative and reactionary rule. The designs of the religious right in Pakistan are no different. Unsurprisingly, both in Pakistan and India, most of the liberal and secular petit bourgeois has jumped onto the bandwagon of this nationalist chauvinism.

Ever since the terrorist attack on the Indian parliament in 2001, there have been periodical episodes of ‘imminent war’ scenarios with militaries moving to the frontiers followed up with army, air force and naval exercises. The fighter jet sorties flying low over the urban areas, and the constant movement of military personnel and equipment are deliberately carried out to whip up war hysteria in society without actually going to a real war.

According to the BBC, Indian PM Narendra Modi spent Thursday at a military operation room where he monitored the Indian army’s movement along the LoC in Kashmir. The Times of India reported: “There have been other top-level meetings over the last two days, including with National Security Adviser Ajit Doval, to discuss the operational situation along the LoC, as well as the military options… India’s options range from concentrated firepower assaults with 155mm artillery guns, Smerch rockets and BrahMos supersonic cruise missiles to ‘surgical air strikes’ by fighter jets to take out alleged terror camps through precision-guided munitions.”

Across the border, the response has been no less jingoistic. Authorities imposed ‘airspace restrictions’ and cancelled several flights. On Thursday, PAF closed Lahore-Peshawar motorway for traffic to allow Pakistan Air Force (PAF) fighter jets practice landing and take-off. Pakistan’s rather peppercorn Defence Minister Khawaja Asif wrote on his official Twitter handle: “The defenders of our skies in a state of constant readiness, Alhamdulillah. Our motorways are our runways.”

However, in these periodical belligerent fits of the reactionary elites of the subcontinent the minuscule saner voices get drowned in the cacophony of unruly frenzy. But the harsh reality is that in the present balance of forces and the ailing Pakistani and Indian economies serious bourgeois cannot afford to go to war. Imperialist and national corporate investments are also a forbidding factor in instigating a large-scale military confrontation. For the oppressed peoples of the region already suffering from a socioeconomic onslaught by this cruel system war would be an unmitigated disaster.

It is also true that the subcontinental adversaries also cannot sustain a durable peace. Once again the main hindrance to any peaceful settlement are the profits of foreign and local capitalist bosses. A peaceful resolution of the disputes, ending episodic threats of wars and bloody confrontations impair the imperialist military industrial complex having major stakes in the armament of these states that preside over the largest concentration of poverty in the world. The other main hindrance to a sustained peace in the subcontinent is the abuse of this external and manufactured threat to crush internal dissent in the name of sovereignty and integrity of the ‘nation states’.

With the passage of years, glaring evidence of the failure of the liberal and the so-called progressive bourgeois sections of the ruling classes to create modern industrialised societies is obvious. The organic crisis of the imperialist grafted capitalism never stood a chance to carry out any of these historical tasks. This gave rise to xenophobic and religious fundamentalist tendencies. India that proclaims to be the largest democracy has a hard-line Hindutva regime with vile neo-fascist elements in domineering positions.

In Pakistan, the betrayals of the traditional mass party, the Pakistan People’s Party, and its leaders paved the way for the rise of Islamic fundamentalists, and a thin veneer of religiosity veiling a society in inertia. However, politically with meagre mass support religious parties are weaker in Pakistan than their Indian replicas. Nonetheless, these Islamic and Hindu fundamentalists feed upon each other to incite religious violence and hatred to break the class unity of the working classes bereft of a revolutionary leadership. State institutions have their stakes in propping hostilities with highest military spending in the poorest of the countries. The rival imperialists and the Pakistani and Indian states nowadays prop up religious proxies for savage aggression. However, this is a very dangerous path to tread upon. The proxies can sometimes influence their makers more than most imagine. If this fanaticism reaches the highest echelons of state power an outbreak of war cannot be entirely ruled out. Such a clash between the two nuclear states will wreak havoc that can annihilate more than one-fifth of humankind that inhabits this region.

There have been innumerable peace initiatives and gestures from different regimes and the so-called civil society. Most end up in failure and dejection. The fundamental basis of the socioeconomic system that is imposed upon these societies doesn’t have the capacity to implement such peace initiatives. With the continued existence of decayed capitalism the existentialist threat to more than one and a half billion souls will relentlessly haunt the region.