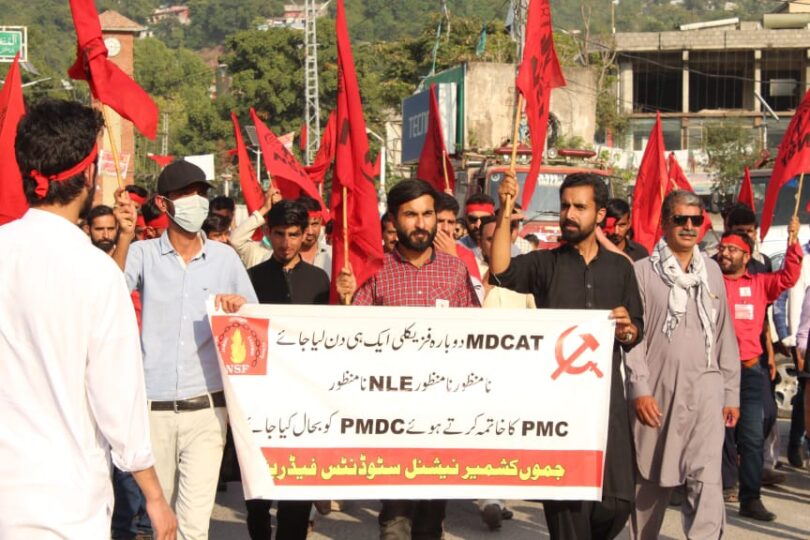 The present Imran Khan government doesn’t seem to be eating its apples. Instead of keeping the doctors away, it has the whole medical community across the country on its tail including doctors, nurses, paramedics, pre-med students, post-med students and others, the jackasses in power have managed to piss off everyone across the table at the same time with their neoliberal policies dictated by the IMF.

The recent wave of protests began with the irregularities in NMDCAT (National Medical and Dental College Admission Test), which as the name suggests is an entrance exam for medical school, and the introduction of NLE (National Licensing Examination), an exit exam for graduating doctors. Protesting students and doctors have been baton charged, tear gassed, arrested and tortured by the police.

The story began in 2019 when the Government introduced two new laws. First, the Medical Teaching Institutions Reforms Act (MTI Act), and second, Pakistan Medical Commission Ordinance (PMC Ordinance). MTI will place medical institutions under a Board of Governors who will have control over “functioning and administration” of the institution. Moreover, the Board of Governors shall comprise of members “not less than 5 and more than seven”, and “no member of the board shall be a Government servant” (section 7) i.e. BoGs will consist of Private individuals motivated by the pursuit of profit maximization. Among other things it will make life harder for the working class and lower strata of the middle classes as they won’t be able to afford health care. Even the meager relief by the state in the form of free consultation, medicine and tests will have to be paid for. Similarly, the PMC ordinance was promulgated overnight by President Arif Alvi on 20th October, 2019, and was meant to dissolve the Pakistan Medical and Dental Council (PMDC), a regulatory body which regulates medical colleges, fees, issues degrees and diplomas etc, and Pakistan Medical Commission was setup in its place. According to the ordinance, PMC “shall be a corporate body” (section 3 sub-section 2) and it is no secret what corporate entities are meant to achieve. The Ministry of National Health Services (NHS) through the Islamabad district administration and police took over control of the PMDC building and it’s over 220 employees were sacked.

A source quoted by Dawn, a reputed daily, on 21st October, 2019, said that a few days back representatives of private colleges held a meeting in Lahore, which was attended by a personality from the United States through Skype.

There were massive protests and strikes by the Young Doctors Associations and Grand Health Alliance, an alliance of YDA, nurses and paramedics, in Punjab and Khyber Pakhtunkhwa (KPK) province. The protest in Peshawar, KPK, was brutally suppressed, doctors were beaten and bloodied.

The recent protests are against NMDCAT and NLE. Last year, PMC decided to conduct NMDCAT in accordance with section 18 of the Ordinance which is “a mandatory requirement for all students seeking admission to medical and dental under-graduate programs”. It was supposed to be a single exam across the whole country as opposed to the provincial MDCATs previously conducted. Students were made aware of this new arrangement just two weeks prior to the MDCAT. They were to prepare for a new test with an enhanced syllabus under two weeks which was very disturbing for the students. There were several irregularities during the exam, “Answer keys” were not provided to the students at the end of their exam, and results were also dissatisfying. There were nationwide peaceful protests by students against PMC’s anti-student policies.

This year PMC decided to conduct NMDCAT online. The exam was to be conducted over a month with two sessions a day. And in this exam “each person shall be provided a unique paper randomly selected by a computer programme and no person will have the right to object to questions or correct answers”. The new regulations for the exam meant that students had “lost the right of rechecking or questioning the authenticity of questions.” Students faced connectivity issues, slow internet, the computer programme won’t regenerate skipped questions, and they were not provided answer keys at the end of the exam. The contract for conducting the NMDCAT was given to Testing and Evaluation Platform Limited, a private company, which according to the website of the Securities and Exchange Commission of Pakistan (SECP) was incorporated on May 21, 2021. PMC had set the deadline for companies to apply by May 10 but the selected company was registered after the due date of filing bids i.e. on May 21st. The fee for the exam was Rs. 6000 and around two hundred thousand students registered for it. PMC also made an advance payment of Rs.115 million to the company.

In accordance with section 20 of the PMC ordinance, PMC has introduced the National Licensing Exam (NLE), which is an exit exam for medical graduates passing of which “shall be mandatory for obtaining a full license”. A fee of Rs. 12000 was fixed and without taking this exam graduates cannot continue as medical practitioners. According to the Special Assistant to the Prime Minister on National Health Services (NHS), Dr Zafar Mirza, NLE is “the best filter to ensure only competent doctors are allowed to practice in the country”. The fact is that this test is the best “filter” to ensure that the test failing graduates don’t ask for the 10 million jobs this government had promised at its inception. Due to the rotten infrastructure, lack of development projects, budget cuts and the implementation of neoliberal policies the government isn’t able to generate enough jobs for the graduates entering the labor market. So, it just wants to put the blame of its own failures on the students. The thousands of students registering for the exam twice a year will also help generate enormous revenues for PMC. The Young Doctors Association (YDA) and other students’ organizations staged a massive protest on 26 August this year, day of the exam, which was repressed by force and the exam was postponed. It was conducted two days later and the state showed its true barbarity when it used Sulphuric acid and pepper spray against the protesting doctors and students. Only foreign graduates and 300 Pakistani graduates, out of 11000 appeared for the exam. The rest boycotted it. YDA and other students’ organizations have warned to seal off the examination center if the test is conducted again.

Becoming a doctor is a dream in Pakistan, both for students and their parents. Parents spend their whole savings just to get their kid through medical school. Students preparing for and even after entering medical school have to go through an intense grind day in and day out, often at the cost of their social life and mental health. This government is making a mockery of those dreams, and what students and their parents have to endure by not addressing their concerns regarding NMDCAT and imposing another pointless exam in the shape of NLE. Furthermore, as is clear from what has said above, this government also plans on murdering those dreams through privatization and commodification of education. The Revolutionary Students Front (RSF), Jammu Kashmir National Students Federation (JKNSF) and Pakistan Trade Union Defence Campaign (PTUDC) stand together with our students and doctors in their struggle against these black laws. We demand,

The Imran Khan government has proved itself to be a complete failure in it’s three years of power. It hasn’t fulfilled any of its promises. Instead of providing 10 million jobs it has made millions jobless; instead of providing 5 million homes it has made millions homeless. It has been ruthlessly implementing neoliberal policies, such as deregulation, downsizing, restructuring, increasing taxes, cutting subsidies and budget cuts for development, all under the dictation of IMF and other imperialist institutions. And now, it is after health and education. As long as we’re under these institutions this nightmare will never cease. Only a revolutionary movement of students and workers aimed at overthrowing this imperialist hegemony can liberate the masses.