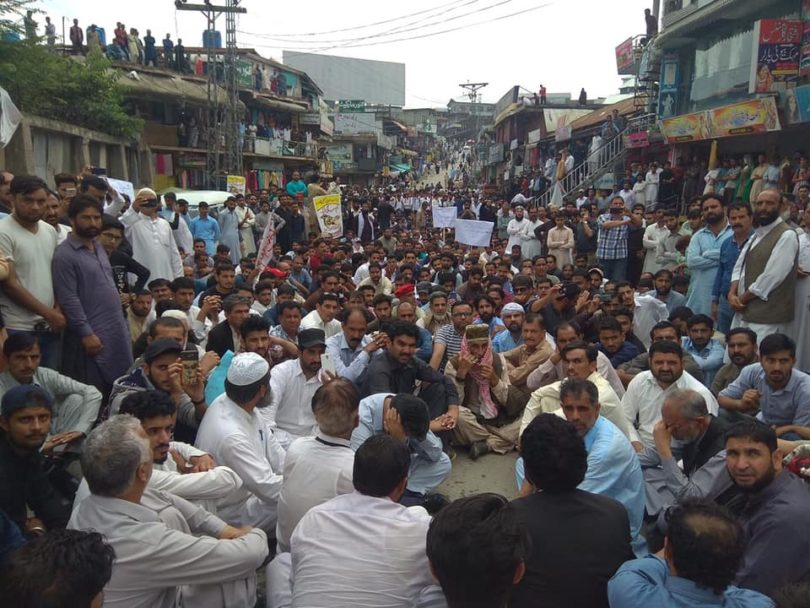 On 26 August protests and rallies were held by Peoples National Alliance (PNA) in different cities of Pakistan held Kashmir and Rawalpindi demanding that all foreign forces must quit from every part of Jammu Kashmir.

The joint protests were called by Peoples National Alliance (PNA), comprised of different progressive, nationalist and left-wing parties and organizations, in Pakistani occupied Kashmir and Rawalpindi. The PNA called protest rallies in district headquarters of PoK including Rawalakot, Muzaffarabad, Mirpur, Kotli, Bagh, Sudhnoti, Bhimber, Hajira, Abbaspur and Rawalpindi, a district of Pakistan that has also the headquarter of the armed forces of Pakistan. There have been huge public gatherings on this occasion that illustrates that the people of Jammu Kashmir want total independence from both the imperialist countries.

A huge rally was organized in Rawlakot, in which the leadership and workers of all the representative parties and organizations of PNA participated, while a temporary shutdown by the shopkeepers has also been seen in solidarity with the people of the other side of LoC. Rally was excluded from Post Graduate College ground and marched through the whole city. Protestors chanted slogans against the forced occupation and raise voices for freedom. Protestors demanded the immediate withdrawal of all foreign forces, the release of all political prisoners and in favour of full freedom. After strolling the city the protest rally transformed into a huge public meeting at Nala Bazar, Rawalakot. Where chairman JKLF Sardar Sagheer Khan, JKPNP representative Imran Shan, representative JKLF(Rouf group) Khalil Ahmed Habib, President JKSIP Farooq Hussain Sabir, District President JKNAP Zulfiqar Arif, Central Leader JKNSF Khalil Baber, JKLF (Yasin) representative SM Ibrahim, Leader JKNAP Azher Kashir, Umer Nazir Kashmiri, Sajid Azam, Kashif Abbas, Imtiaz Akbar, Naeem Naz, Yasir Younis, Yasir, Triq Aziz and others addressed the gathering. Speakers vowed that they will continue the struggle until the freedom. No oppression can stop us, they stressed. They demanded the state subject rule in both sides of LoC. All the speakers stressed that all foreign forces must recall their armed forces and allows Kashmiris to decide their fate. They said we have no ambiguity regarding so-called ‘Muslim Ummah’. They can’t fight for the oppressed classes and can not secure our freedom nor they will play any progressive role in our struggle. We believe in the peoples’ struggle of Jammu Kashmir with the mass support of Pakistan’s and India’s oppressed classes. They also honoured the progressive forces and youth of both countries who marched and protested against the brutality of the Indian state in Kashmir and expressed solidarity with the people of Kashmir. We need support from the ordinary working class and oppressed nationalities of India and Pakistan, they said. A joint struggle is required to eradicate the brutal system and develop a peaceful atmosphere to live in. Slogans were continuously chanted with great enthusiasm during the whole procession.

Another protest was held in Muzaffarabad, the capital of Pakistan held “Azad Kashmir”, where the rally was taken from the Central Press Club. Hundreds of men and women marched through the city and reached UN military observation office where the PNA leadership wanted to file a resolution on state repression but no representative of UNO showed concern to accept the resolution. Such sloppy behaviour by the UN office made the protestors to set the resolution on fire in front of the office. Then rally marched back from the UN office towards Central Press Club, where a mass meeting was held. Sardar Liyaqat Hayyat, General Secretary PNA, addressed the gathering there.

A rally was taken from Rawalpindi Press Club to Murree Road after chanting slogans rally marched back and outside the Press Club, it was transformed into a public meeting. Students, workers, women and political activists from different organizations of Pakistan and Kashmir participated in the protest. Asif Rasheed of RSF, Nisar Shah of JKAWP, Rehana Akhter of JKNSF, Sardar Anwer of JKLF, Changaiz Malik of PTUDC, Adil Khan of JKNSF, Kamran Naseer, Fahad Zareen, Shehryar Khan, Zeeshan Anayt, Hafiz Ubaid, Professor Khalique and Sajid Kashir addressed the protestors. Comrades from Pakistan expressed complete solidarity with Kashmiri people and said that they fully support the nation’s right of self-determination.

The protest was organized in the Central Chowk. Before the public meeting, a rally strolled the city, where hundreds of participants chanted slogans against foreign oppression. After that central leader JKLF Sardar Rouf, Sajjad Afzal of SIP, General Secretary JKNSF Yasir Hanif, Yasin Anjum, Irfan Qayyum, Shahazaib Akhter and Dr Najeed Ullah addressed the rally. In the end, a resolution was unanimously passed against the oppression of both states in Kashmir.

The protest was organized in Mirpur as well which is Divisional Headquarter. Where President PNA Zulfiqar Raja, Sagheer Choudhary, Saad Ansari, Rizwan Kramat and others addressed the participants.

A rally was organized in Bhimber, where hundreds of participants chanted slogan against foreign occupation. The speakers expressed solidarity with the people of Indian occupied Kashmir and show strong ambition to organize PNA activities to further enhance the struggle against both imperialist countries.