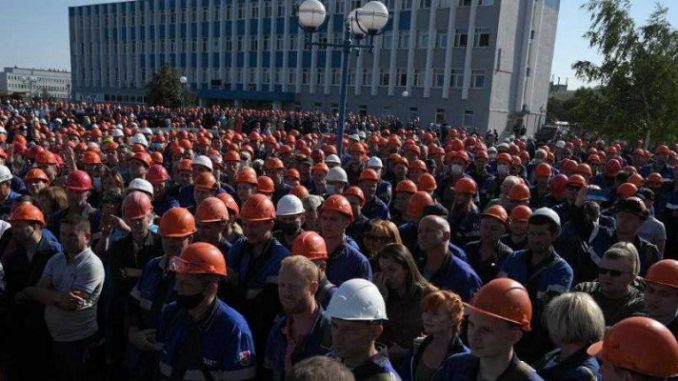 Dear brothers and sisters in Belarus,

We are fascinated by your force and bravery in the struggle against the autocratic government. It is obvious that the conservative-oligarchic regime was afraid, first of all, of the resolute and organized protest of the Belorussian working class and its independent trade unions. It was your strike and the working class protest in general that allowed not only to stop open police brutality against Belarusian people, but also to resolutely raise the issue regarding the cancellation of the result of the presidential election, falsified by the regime.

We decisively support your present general democratic demands for resolute changes in Belarusian society, prosecution of those who fabricated the results of the election, and of those special police units who extremely abused their power.

It’s very important to remember the bitter experience of Ukraine, when a just and fair uprising against the Yanukovich regime in 2014 was used by openly anti-worker and anti-union forces. These same forces are presently conducting violent attacks against the democratic rights of workers and trade union activists, increasing the retirement age and conducting the course of neo-liberal reforms against the people.

Unfortunately, working class and trade union activists in 2014 couldn’t become an efficient and significant factor of the democratic revolution in Ukraine. They were poorly organized and not prepared enough. This fact is being used by conservative ‘protectors’ of the autocratic regime, who try to convince workers not to support the struggle for a democratic transformation in Belarus, to stop the strike and de-facto support autocratic-capitalistic Lukashenko regime.

We resolutely deny these calls for virtual collaboration with the regime. Only the consistent struggle for democracy gives the workers a prospect to finally overcome autocracy and violence. However, the working-class and labour unions of Belarus should begin the development of their program of demands. This program would stop future democratic and free Belarus from falling onto the path of anti-worker neo-liberal reforms and changes. Neo-liberal reforms and mass privatization will inevitably return the situation to renewal of dictatorship and police violence and will strengthen both reactionary revenge forces and those, who wish to establish in Belarus a regime of external control, both pro-Western and pro-Russian. We believe that fighting for true independence of a workers’ democratic Belarus is one of the most important issues of the current situation.

There could be only one condition in the fight for fulfilment of your demand: workers of Belarus need to and have to organize a stable and steady relationship with all of the Belarusian working collectives, with independent trade unions, with active members of communities and environmental activists. Currently right-wing liberal forces are more organized, and they will attempt to do everything to keep Belarusian workers from becoming an autonomous political force, trying to keep them remaining within the limits of the neo-liberal politicians with their program of neo-liberal reforms against the people. Therefore, it would be correct for independent Belarusian labour unions to discuss the issue of nominating a candidate for the future presidential election. Such a candidate could become a gravity pull for all truly democratic and working forces in Belarus. Such action could be a real strategic alternative to both the forces of anti-worker authoritarian revenge and numerous pro-Russian and pro-Western candidates, which are already turned to complete the dissolution of the independent democratic way to the future of free and people governed Belorussia.

Respected Belarusian brothers and sisters of labour and trade union struggle,
Ukrainian working class stands with you!
Please remember, that only through struggle we can win our rights!
Presently your struggle is the most important point worldwide!
At this moment you are at the front line for true democracy and the rights of the workers!
Be vigilant, be resolute and the best of luck!