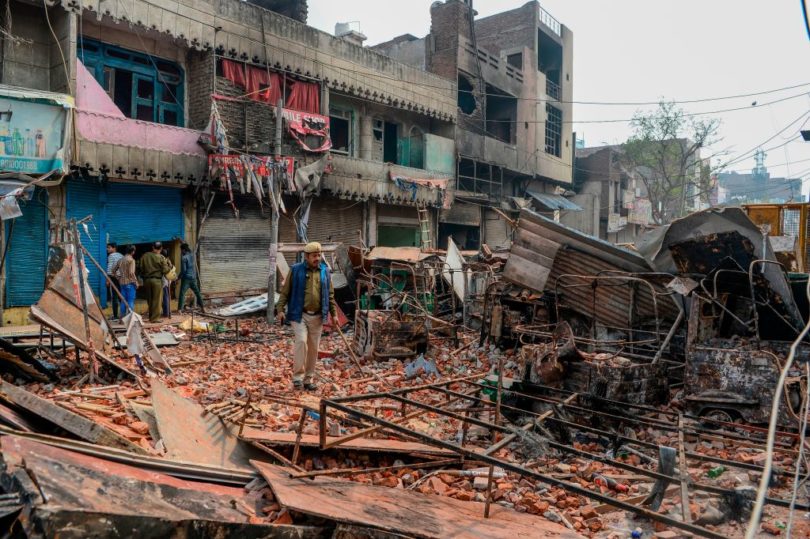 Recently, northeast Delhi, a mainly working-class enclave, witnessed horrific scenes of the pogrom against its Muslim inhabitants. During this maniac religious frenzy 46 people, mainly Muslims, were brutally thrashed and killed. Their properties, shops and mosques were plundered and set on fire. The gruesome and abhorrent videos of arson circulating on social media were reminiscent of the hair-raising pogroms committed during the religious partition of Indian subcontinent back in 1947. The immediate trigger of violence was weeks of sit-in protests in Delhi against a new citizenship law (Citizenship Amendment Act or CAA), passed by parliament last December which grants speedy citizenship to immigrants from religious minorities in Afghanistan, Pakistan and Bangladesh except for Muslims, NRC (National Register of Citizens) and NPR (National Population Register) both of which requires all the people residing in Indian soil to provide documentary evidence of their Indian ancestry or else they could be stripped of their citizenship. While those non-Muslims who fail to provide documentary evidence of their Indian ancestry could still be accommodated through CAA, the Muslims failing to provide such evidences would have no recourse to reclaim their citizenship.

The government-sponsored goons of BJP attacked the anti-CAA protesters, mainly Muslims, which subsequently turned into mayhem. The Neo-fascist Modi-led BJP government had been struggling to quell the protest movement. The recent pogrom was the culmination of months of endeavour by the BJP to contain the anti-CAA/NRC/NPR movement.

The protest movement around the new citizenship law had been continuing since the latter’s ratification by parliament last December. Despite all the clamp down and brutality of BJP government, the movement remained undeterred. The spontaneous sit-in protest in Delhi’s southeast Shaheen Bagh enclave has become a shining star of the countrywide movement. Women are playing a leading role in this sit-in. Thousands of people attend the sit-in daily. This sit-in has inspired many other similar sit-ins around the country. This movement has surpassed the general demand of repeal of CAA and has raised the more pressing issues of unemployment, price-hike, education and health etc. The protesting farmers also joined the sit-in. Many progressive and left leaning intellectuals, MPs from different parties, film stars and social activists also joined them. Along with Shaheen Bagh the protests were also continuing in other parts of the city namely Hauz Khas, Jaffarabad, Seelampur, Mustafabad, Nizamuddin and Indralok.

On 23rd February the anti-CAA/NRC protesters, mainly women, in northeast Delhi’s Jaffarabad enclave blocked the road below Jaffarabad metro station. On the same day, BJP leader Kapil Mishra called on his supporters to gang up at Maujpur Chowk “to give an answer to Jaffarabad [blocade]”. He made a fiery speech in front of his frenzied supporters threatening to clear the road himself if police failed to vacate the road within three days. Soon after his hateful speech the pro-CAA mob started pelting stones on the anti-CAA protesters. For the next three days, the ensuing violence which had all the hallmarks of a premeditated pogrom claimed the lives of 46 people most of whom were Muslims. The Muslim properties, shops and houses were burned. The mosques were torched and desecrated. The police either looked the other way or blatantly supported the Hindu extremist mob. And amidst all this mayhem and slaughter, Modi and Donald Trump were showering each other with lavish business deals and enjoying extravagant feasts just twenty kilometers away.

The religious bigotry has always been the most favourite instrument of the Indian ruling classes to maintain its grip on society. All the governments, irrespective of their parties, have always resorted to religious divide whenever faced with mass upsurge or other crisis. Even the so-called “secular” Indian National Congress at times took refuge in religious obscurantism. It was Congress which nurtured the Hindu fundamentalist Shiv Sena to crush the growing communist influence among working classes of the then Bombay city. In fact, historically, Indian National Congress has more religious pogroms to its credit than the current BJP government.

Ever since the rise of BJP to power, this anti-Muslim Hindu religiosity has taken uglier dimensions. Mob lynching of Muslims and lower caste Hindus (Dalits), suspected of cow slaughter, has become more rampant. The right-wing Hindu chauvinist organizations RSS, Bajrang Dal, VHP and other Sangh outfits demonize the Muslims as less Indian or traitor. They are either portrayed as the descendants of Arab or central Asian invaders or those “coward” who for the fear of their lives could not resist the invaders and converted to Islam. History textbooks are being rewritten to conform to Hindu fundamentalist bigotry. At some instances part of Muslim history has been altogether removed from textbooks. The BJP government and its leaders have given themselves up to the task of “correcting” the wrongs and “excesses” done to Hindus in the past. The purpose of this heinous rewriting is to instill hatred and religious bigotry in society at the most basic level.

The question arises as to why the Indian ruling elite is deliberately poisoning the minds of children and the society at large? Are they out of touch with reality? Don’t they realize that the consequences of this madness could endanger the whole fabric of society? On the face of it, such measures tantamount to madness, but deep down there is a method in this madness. Such so-called religious riots or pogrom or whatever it may be called, give a new lease of life to the ruling socioeconomic system. The tragedy of the capitalist classes of ex-colonial countries has been their belated arrival onto the stage of history. Their technical and cultural backwardness render them incapable of either competition in world market or developing society. They have failed to fulfill their historical task and secure their historical legitimacy. Their social bases are fragile and weak. Having failed to develop a modern centralized capitalist state with strong writ on society, the Indian ruling classes resorted to other means to assert their writ on society. It is through fomenting religious antagonism that they assert their writ and develop a social base for themselves.

There are several historical precedents when Indian rulers orchestrated religious pogroms to absolve their historical incompetence and divert the attention of the masses from economic crisis. In 1991 India was facing a balance of payment crisis and was on the verge of default on its financial obligations. The foreign currency reserves shrank to the level that it could hardly be sufficed for three weeks of imports. Consequently, India had to rush to IMF and World Bank for emergency loans. It had to mortgage its 67 tons of gold reserves to avoid a default. It led to the liberalization of economy and the dismantling of the so-called Nehruvian socialism i.e. state-protectionist policies. This dismantling of state protectionist policies i.e. deregulation, privatization, opening up of markets for foreign investment and elimination of subsidies etc. led to sharp contradictions and inequality increased. During this economic onslaught against the Indian masses, a religiously charged Hindu fundamentalist mob attacked the historical Babri mosque in Ayodhya and demolished it. The incident ignited further riots across many cities. Behind the back of this religious frenzy the ruling classes pushed through their neo-liberal agenda to rescue Indian capitalism.

But the rise of BJP also signifies a shift in the world outlook of Indian bourgeoisie. After more than a half century of tryst with Congress party and secularism, they have now made a decisive break with Congress and has even shed the semblance of so-called secularism. It is the historical failure of the Indian capitalist class to construct a modern secular capitalist state. They have utterly failed in building a healthy and prosperous society. Consequently, the social contradictions arising out of economic disparities could rip through their system at anytime. That’s why they can’t afford such clichés as secularism. They have bestowed their support upon a right-wing neo-fascist BJP. As the crisis of Indian capitalism further aggravates there is less and less room for secularism and other niceties of bourgeois democracy which the Indian left parties are very fond of talking about.

Despite all boastful exaggeration of India’s economic growth and its glorification as “shining India”, the country’s economy is in deep trouble. According to Forbes, real GDP has dropped to 4.5 per cent, the lowest in last six years. Given the new methodology of measuring GDP, even this amount is overestimation. Unemployment rate is at an all-time high of 8.5 percent, the highest in at least 45 years. The gravity of unemployment is evident from one instance. Recently the Maharashtra government had received a staggering 1.2 million applications for a meager 8000 posts of Police constable. Forbes has even compared the present slowdown to the worst economic crisis in 1991. On the other hand, Modi is dreaming of transforming India into a $5 trillion USD economy by 2024, but for that it needs an annual growth of 12 percent which is a dismal possibility. Even Modi’s $20 billion corporate tax cut in last September didn’t work. Consumption is declining due to purchasing power erosion. The neo-liberal reforms of privatization, deregulation and other recipes of neo-liberal economics are playing havoc with the lives of ordinary masses.

Back in 2014, the corporate media and big businesses all lined up and lavishly poured their capital to promote Modi as a person who, from a Chai Wala (tea vendor) in childhood, through hard work and dedication would become the next prime minister of India. He was portrayed as a person who had gone through many hardships of poverty and thus conscious of the problems of India’s poor. The failure of left parties to put forward a genuine socialist program further paved his way to victory. Ever since his coming to power the plight of the masses has further deteriorated, so has the religious bigotry in India. There is no more room for a harmonious social progress under the present socioeconomic structure. As a result, in 2019 general election, Modi had to resort to anti-Pakistani rhetoric.

The religious bloody partition of Indian sub-continent was designed by British colonialists and their local stooges to salvage their system from the rising tide of liberation movement which was threatening the whole colonial capitalist system and taking on a socialist character. The so-called independence was the result of the defeat of genuine mass movement namely the revolt of Indian sailors in 1946. India and Pakistan was born out of a religious counter-revolution. That’s why these two states, despite India’s claim of being a secular state, have all the hallmarks of religiously bigoted states. With the organic crisis of capitalism further deepening, the Indian rulers will have more and more recourse to Hindu fundamentalist rhetoric. They can orchestrate even bigger and bloodier pogroms than the one in Delhi to bail out their ruler-ship. Even they could create another war-like scenario with Pakistan to quell the unrest at home. However, the masses are also resisting the economic and social onslaught of Modi. In last fast years there were numerous general strikes, farmers’ long march and students’ movements. These stirrings can turn into a massive social explosion. A genuine mass movement will immediately transcend the artificial border which divides the subcontinent. As the great Marxist ideologue Lal Khan once said, “There won’t be two separate revolutions in Indian and Pakistan. They will have one common revolution”. A revolution in either of the two countries will immediately nullify the Radcliff line. Only through revolutionary overthrow of capitalism and undoing of religious partition can the religious bigotry be uprooted from Indian sub-continent.