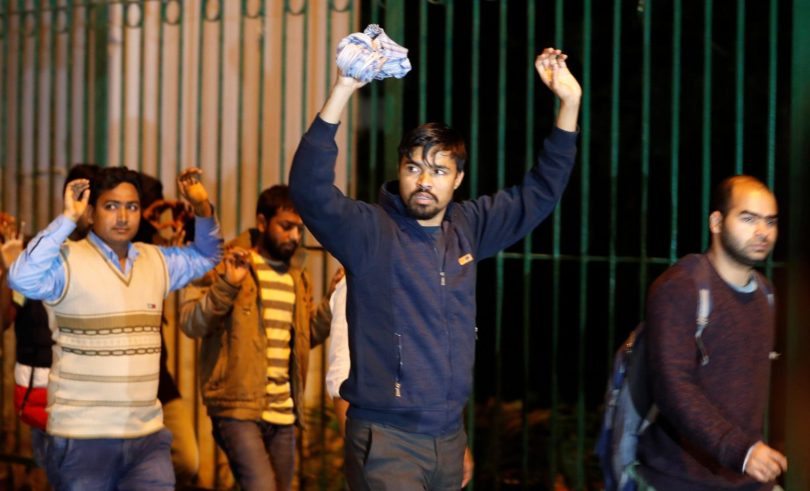 Nobody anticipated what happened inside our Jamia Millia Islamia campus yesterday (Dec. 15).

In the morning, we approached the Delhi police for permission for a protest march in the Batla House community near our university, and they allowed us to use a particular lane. Around noon, we marched, raised slogans, and put across our point that the Citizenship Amendment Act is discriminatory. We sat on the road and raised slogans.

I want to emphasise, all this was peaceful. The Delhi police personnel were positioned only kilometres away from us.

After an hour or so, we saw residents of Jamia Nagar and other nearby areas join us. They marched towards Surya hotel in New Friends Colony, a short distance from Batla House. We Jamia Millia students then appealed to our groups to stay put and not join the locals.

We continued to protest at the spot we had permission for.

Around 2 pm, the students of Jamia Millia’s Faculty of Law were to join us and then we were to march peacefully towards the Delhi police headquarters. It was decided there won’t be any sloganeering anymore.

However, before that could happen, the locals, who had entered New Friends Colony, turned violent.

Soon, news began pouring in that they were pelting stones at parked cars and moving buses and damaging property. We got to know that they’d also torched a bike.

What followed was unbelievable. We saw police personnel light a fire from the torched bike and burn the buses. We know the Delhi police is responsible for it. Some students even recorded the entire incident on their cell phones. These videos confirm there wasn’t a single student near the torched buses, it was just the officers and constables of the Delhi police.

Now I want to ask those blaming us students for the violence, did we torch the buses sitting inside our homes or from inside the campus?

Moreover, as soon as the students received news of violence, we called off our protests and returned to the university.

The Chaos That Followed

When we returned, everyone made sure that outsiders don’t enter the campus. We knew (or that’s what we thought) that the police weren’t inside the university, so the miscreants could possibly enter. We were extra cautious.

The security guards at the gates checked the identity cards of the returning protesters, entering the campus. It was only us, the students.

We thought the worst was behind us. We were angry. To analyse what had happened, we met at the canteen; some of us hadn’t eaten since morning. A few minutes after we settled down, a tear-gas shell was fired inside our canteen from the direction of our library.

The entire campus was soon taken over by the police. Four or five more tear-gas shells were fired. The police harassed the security guards and forced them to open the university’s gates.

Now, the police were inside the campus. We were scared, really scared.

Out of fear, some of us ran towards the library. The police then bombed the reading hall with more tear-gas shells. Some students were caught by the police and told they would be escorted to their hostels safely. The police said they were only looking for “outsiders.”

Later, we heard gunshots. I have recorded some videos of the police firing inside the campus.

We got to know that the students supposedly being taken to their hostel rooms were being detained and beaten up badly. The police took them somewhere, we think it’s Kalkaji police station, but we are not sure. When we asked the police, they hurled abuses at us.

I, along with my friends, was inside the campus, but when the police began firing gunshots, we escaped through the gate near Batla House.

“We Are Students Not Terrorists”

Chief proctor Waseem Ahmed Khan confirmed that the police did not have permission to enter Jamia. I can guarantee their (police’s) intention wasn’t to catch outsiders; they wanted to fuel communal tensions.

Let me tell you what some of the personnel were saying while beating us up: “Maaro inko, ye katwe hai” (Thrash them, these circumcised). I heard them saying this many times.

They opened fire at the campus, damaged the mosques, and beat up students. Please, remind them if you can that we are students, not terrorists.