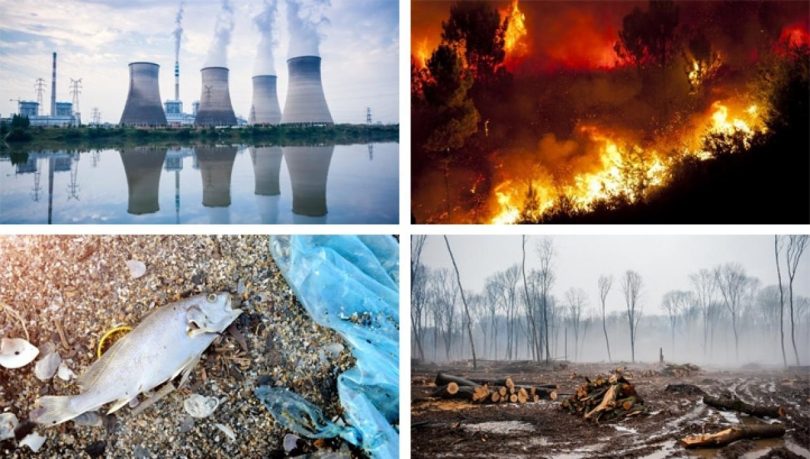 Today we are witnessing the process whereby the very conditions that sustain life are being destroyed amid climate and environmental catastrophe as the result of the gravest crisis of capitalist imperialism. Our times echo Lenin’s words:

“History has now confronted us with an immediate task which is the most revolutionary of all immediate tasks confronting the masses of every country”.

First, we must identify the logic upon which capitalism operates, namely, infinite growth on a planet with finite resources, the exploitation of labour to generate maximum profits and of course, private ownership over the means of production and distribution. Secondly, we must understand the development of global capitalism in sowing the seeds of the climate crisis and how we currently see it unfolding. The initial mercantile phase was focused on the transition from feudalism to capitalism in Europe, in gaining control of domestic and foreign trade including the search for markets abroad resulting in colonialism. Then came the Industrial Revolution which was defined by the formation of factories, mills and railways etc. with sharp increase in production which was greatly facilitated by the extraction of raw materials and cheap or even slave labour from the colonies. It is in this era where we can trace rises in carbon emissions as the economy became dependent upon the consumption of fossil fuels. The preceding stages laid the groundwork for imperialism, under which we live today, where multinationals and large monopolies from Global North countries that became rich due to these capitalist and colonial relations, control the global economy with institutions like the IMF and World Bank to maintain their hegemony and continued exploitation and looting of resources of the Global South.

Therefore, despite the fact that developed countries overwhelmingly contribute to global carbon emissions that drive climate change, to the extent that the US military-industrial complex is responsible for one-third of all emissions, it is the poor countries that bear the brunt of the crisis. This includes record high rises in temperatures that make regions uninhabitable, mass displacement, food and water shortages, rise in sea levels, floods, landslides etc. It is the inevitable outcome of the uneven development inherent in global capitalism, where historically colonized and oppressed parts of the world are used to extract raw materials and workers employed on starvation wages, to produce goods that are to be exported for super profits by rich countries. Underdeveloped countries are trapped in cycles of debt and their economic policies are dictated by the so called “Structural Adjustment Programs”. This constitutes a very specific kind of development in such countries, where they can never build their productive forces to be truly independent, while the comprador capitalist state exercises colonial tools on semi-colonies and oppressed nations and ethnicities within its borders. This is in the form of enclosures and privatization of commons like land, soils, rivers, fisheries etc. for mega development projects like dams, housing schemes, tourist resorts etc by big conglomerates which disrupt traditional livelihoods, dispossess native communities and destroy natural ecologies.

It should also be noted that the state that is imposed on the economies of developing countries by imperialists is also blamed on the oppressed. Due to the lack of environmental regulations and poor working conditions, outsourcing by multinationals and their emissions, wastes and pollution is blamed on those countries whose local exploited masses are hardly in a position to benefit from this production or consume any of these goods. India and China are examples of this, where the demand for a significant portion of production is determined by and is exported to the western countries, and yet they are counted among being the second and the fourth largest carbon emitters contributing to global warming.

A very brief overview of recent climate disasters in Pakistan and India has been a record-breaking heat wave and water shortages that resulted in several deaths, of which one example here was in Pir Koh, Balochistan. There are floods in northern areas, South Punjab and Baluchistan, hundreds of people lost their lives and the death toll is still increasing. In Karachi, heavy rains resulted in floods that submerged parts of the city and took the heaviest toll on the slums and shanty towns (Katchi Abadis) of Gujjarnala and Orangi, with no relief. In Bangladesh, torrential rains left almost one quarter of the country underwater, destroying the homes of millions. Countries in Africa have also been facing deeply catastrophic effects like prolonged droughts in Kenya, Ethiopia and Somalia which have pushed rural communities to the brink of starvation. The situation in many Latin American countries is no different, with glaciers melting at unprecedented rates and deforestation, especially of the Amazon. Throughout extreme temperature rises and drops, water and food scarcity, it is the poor and the working class that is exposed to the worst and face serious health hazards and even death.

Another major factor in exacerbating the climate change is the mindless consumerism which leads to the production of luxury commodities that are solely for the consumption of the middle and the elite segments of the society, while the basic necessities of the working masses are neglected as profit takes precedence over needs. A prime example of how privatization of public services and austerity measures that are a characteristic of the era of neoliberalism have worsened the climate crisis is the case of public transport. The automobile and aviation industry does not benefit from the provision of public transport as it does from cars and private jets, and so transport accounts for 14 per cent of all carbon emissions.

In 1972, scientist Donella Meadows published a report titled “The Limits Of Growth”, which studied and observed the patterns of economic growth and made predictions on its impact on the environment. She concluded that the very premise for exponential growth with limited natural resources was an unsustainable economic model and would collapse in approximately the mid-21st century. The findings of much of the more contemporary research indicate a similar trend. UN research estimates that by 2050 there will be mass displacements of as many as 20 million climate refugees as a result of environmental disaster, mostly from Global South countries.

Given the imminence of the climate crisis and its effects we are presently experiencing, the question arises of what the alternative can be. One of the responses of the ruling class has been greenwashing the movement for environmental justice to completely side-line the fundamental question of how production is organized and its effects, and instead stress the transition to renewable energy. Whether it is proposals like Green New Deal or Great Reset, they are all based on the faulty assumption that corporations that are responsible for wreaking havoc on the environment in the first place, will follow sustainability guidelines and switch to less profitable modes of production for the long-term interest of all. These proposals also seem to be blind to the existence of imperialism and fall so short of addressing the question, that they are akin to a form of denialism. The campaign for Green Capitalism can be pictured simply as follows: A climate activist in an NGO in the imperial core wearing a “we are all in this together” t-shirt with an earth symbol, which was produced by a sweatshop worker in a poor country with toxic wastes dumped near their local slum.

Understanding these factors, what then is the real solution? First, we have to dispel with any notions and all attempts to preserve the unnatural and destructive system by the capitalist class which holds the sole blame for the crisis, like the Malthusian notion rooted and institutionalized in the colonial and racist mentality that overpopulation and backwardness of underdeveloped countries is the problem. Secondly, we must acknowledge that a problem on a global scale makes internationalism and solidarity between the oppressed and downtrodden populations of all countries, particularly those of Global South, along anti-capitalist and anti-imperialist lines, a prerequisite for imposing radical climate action. It is imperative that the masses who are the first to suffer the worst effects of climate change and have contributed the least in producing it, get to determine the solution rather than those who are the last to face the outcome of the crisis they created.

The climate crisis is unique from other crises in that it worsens and sharpens all other crises and contradictions. Ever since the 2008-2009 crash, we have witnessed the decline of the neoliberal order and increasingly desperate efforts to save it. The Covid pandemic made it clearer than ever that this was not possible and exactly what the response and regard for life this system has. The fact of environmental degradation brings forth the likelihood of more pandemics and viruses as well. And now, amidst inter-imperialist conflict, US and NATO military expansionism, record high inflation and the possibility of nuclear war, we are once again confronted with the necessity of revolution and socialist construction. It is the only alternative which offers the economic, social and political framework which can answer the question of the environment and the future of life itself, which is either socialism or extinction.

Mainstream academics and intellectuals would have us believe that history is linear, from barbarism to enlightenment. Some like Fukuyama would go as far as to declare liberal democracy the “end of history”. The past for such thinkers is reduced to a series of individuals and their ideas, and the prospects of the future for them also depend on what members of the ruling elite decide upon. But the masses of working and oppressed people have always known better, and it is in times of crisis that our consciousness transforms and we articulate the direction we want to take. History develops in zig zags, regresses into reaction and makes leaps of progress. It is precisely these historical conflicts and changing material conditions that shape the class struggle and society most profoundly. The existential threat of climate breakdown places us in such a moment in history as well, which Marx rightly noted, leads to “either in a revolutionary reconstitution of society at large, or in the common ruin of the contending classes”.