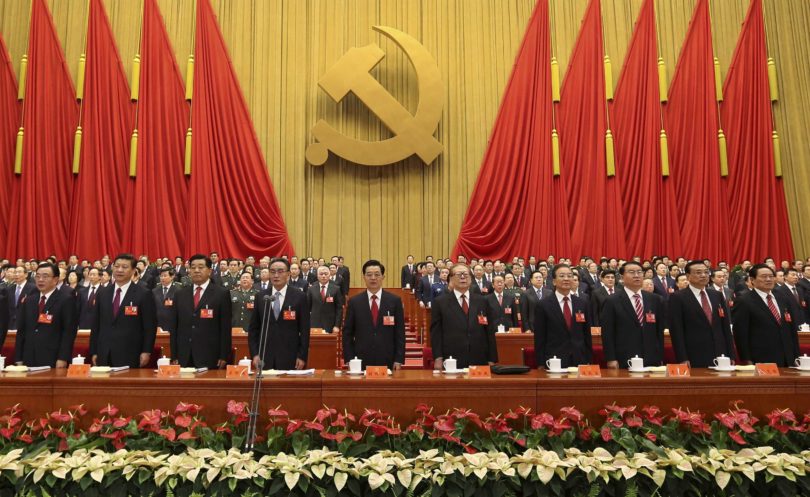 The Chinese Revolution of October 1949 was the second most significant historic event after the Bolshevik Revolution of 1917. However, from its inception, the Chinese Revolution was bureaucratized. But the elimination of capitalism and landlordism gave a huge imputes to the society that surged forward in China. Its isolation and the nationalist democratic despotic rule was bound to erupt into a crisis. The pro-capitalist wing took over power and started the counter-revolutionary restoration of Capitalism after 1978. This Capitalist re-emergence in China along with the collapse of Soviet Union, the defeat of Stalinism was attributed to the ideas of Socialism and Marxism by corporate media and liberal intelligentsia. This article explains the present situation in China and impending crisis of Chinese Capitalism inspite of its worldwide glorification by corporate media.

On Wednesday, October 25th the newly ‘selected’ seven members of the standing committee of China’s Communist Party’s Politbureau, aged between 61 and 67 were revealed to a focused world. However, no apparent heir to the leader of todays China, Xi Jin Ping was sighted. On Tuesday, the final day of the week-long Communist Party of China’s 19th congress held every five years Xi Jinping has been elevated as China’s most powerful leader since Mao Zedong after Xi’s new ‘theory’ of “Thoughts on Socialism with Chinese Characteristics for a New Era” was added to the party’s principles, in Beijing’s ‘Great Hall of the Peoples’. In a rather brief speech as compared to his opening address of three and a half hours, Xi said: “Today we, more than 1.3bn Chinese people, live in jubilation and dignity. Our land … radiates with enormous dynamism. Our Chinese civilisation shines with lasting splendour and glamour.”

Since the Communist Party of China was founded in 1921, only Mao himself has been honoured to such reverence while still alive – with a political philosophy called Mao Zedong Thought. The Chinese Communist Party (CCP) is the world’s largest political party with a membership of almost 90 million that has ruled China since the October 1949 revolution. However its not the same party as was the case under Mao.

The picture being put by the Chinese ruling elite and the new ‘Helmsman’ after a congress that was held amid the tightest security arrangements ever seen is not all that rosy. When Xi came to power in 2012 corruption was rampant in the party’s various rungs of leadership. This post Mao leadership arose with the increase capital accumulation due to their status as hierarchs of the party. These ‘communist’ leaders have amassed obscene wealth. The richest 209 communist party parliamentary delegates are each worth more than 2 billion yuan ($300 million) – their combined wealth is equivalent to the annual GDPs of Belgium and Sweden.

In the post-Mao era starting in the autumn of 1976, the Chinese communist party hierarchy abandoned central planning and began to re-embraced market economy. With “pragmatism” “Seeking truth from facts” and  “getting rich to become glorious” clichés extolled by the then pro-capitalist leader Deng Xiao Peng became the Party’s dogma. In the crisis of bureaucratic mismanagement and ‘nationalist socialism’ at the time Deng adopted the counter-revolutionary policy to restore capitalism. It was Deng who coined the reactionary term, “market socialism”. Some consider China as a state capitalist economy, others call it a deformed socialist economy but its capitalist restoration although in a caricatured shape has taken palace. Since this process gained momentum in the 1980s, private businesses have assumed a bigger role in the economy. China’s 32 provinces, 282 municipalities, 2,862 counties, 19,522 towns and 14,677 villages threw themselves into an open competition for investment and for profit incentive of profitability.

The private sector now contributes more than 60.7 percent of China’s GDP growth and provides over 80 percent of jobs. This is inspite of the fact that the State Owned Enterprises (SOE’s) are larger in size and proportion. China joined the World Trade Organization in 2001—an indication of the transformation into a market-based economy. In the 1950’s and 60’s, even India’s economy under Nehru was 74 percent in state control. That didn’t make India a socialist country but all the capitalist institutions such as the stock exchange and chambers of commerce were functional and dominant. China inspite of tight state controls has gone far into capitalist relations imposed in society. It is much ahead of the mid-century India with its capitalist expanse and activity in economy and society. In chapter three of his brilliant work, Socialism: Utopian and Scientific, the great Marxist teacher, Fredrick Engels wrote, “State-ownership — does not do away with the capitalistic nature of the productive forces. In the joint-stock companies and trusts, this is obvious …the workers remain wageworkers — proletarians. The capitalist relation is not done away with.”

However, notions of the likes of Imran Khan who eulogise the ‘Chinese model’ that is attributed to have lifted 700 million out of poverty are obtuse. The reality is far from the truth. The World Bank that had its own vested interests with the Chinese leaders gave this statistic. World Bank’s official data claimed that only 11.2 percent (almost 150 million people) lived on less than $1.90 a day. Some how this imperialist institution missed the fact that 27.2 percent (almost 360 million people) lived on less than $3.10 a day. The reality is that more than 950 million people in China live below 5 dollars per day.  With life in China’s cities so costly this is hardly a situation of the oppressed masses being pulled out of poverty. The average figure is also skewed by the huge disparity between the oppressor and the oppressed classes along with the urban and rural incomes disparity.

The main criticism of China by the western imperialists is not that China is not capitalist enough, but they want a more ‘democratic space’ for the corporate capital to operate unhindered and loosened state control. Capital controls are imposed and enforced and the currency’s value is manipulated to set economic targets to the annoyance of the western corporate bosses. Lenin explained that one of the main characteristics of imperialist formation is when a capitalist state starts to export capital for exploitation of other lands. Today’s China is the largest exporter of finance capital and corporate investor around the planet. Here again, its rising domination as a capital investor has a competitive edge against western imperialist firms that irritates the experts of the western bourgeois. Some of the successful Chinese corporations are private enterprises such as Huawei, Lenovo and Ali Baba but have close links with communist party’s hierarchy. Chinese companies such as E-Deodar Robot Equipment, Siasun Robot & Automation, and Anhui Efort Intelligent Equipment aspiring to become multinationals, challenge the incumbents such as Switzerland’s ABB, Robotics and Japan’s Fanuc for leadership in the market.

The Chinese economy is far more sophisticated and developed than at Deng’s time of a right wing coup in the late 1970’s. The restoration process started with the stress on profits from exports and investment—   ‘primitive accumulation’. Very different problems haunt China’s rulers today.  Mainly it’s the shifting the base of economic development from investment to consumption, from manufacturing to services sectors fro their capitalist strategies.

Inspite of the intense efforts being made in this direction the change is too slow to prevent over-investment and accumulation of overcapacity in automobile, steel and other industries apart from real estate, housing and property sectors. The growth rate has drastically come down since the ascent of Xi Jinping to around 6 to 7% percent. This could plunge China into a Japanese type period of prolonged stagnation or even a crash. China is the most indebted country in the world where the public sector debt reached more than 255 percent of the GDP in 2016. This debt was incurred to finance the artificial boom in investments to finance gigantic domestic mainly infrastructural projects and massive international ventures such as the 900 billion dollar Silk Road Economic Belt and the 21st-century Maritime Silk Road, better known as the One Belt and One Road Initiative and CPEC in Pakistan etc.

The problems that Xi faces even with his absolute power are that wherever capitalism penetrates a society it brings along corruption, prostitution, gambling, speculation and crime as its intrinsic organic parts. Even with the mass purges in the communist party by Xi, the basic root causes of these evils remain intact. On the other hand, the massive investments of western imperialists and the Chinese conglomerates in the last decades have created world’s largest proletariat in China. These workers have started to stretch their muscles with colossal strike movements in the last few years.

China arose as a world power not at the ascent of the system but in the period of the terminal decline of world capitalism. This has exacerbated the contradictions rather than resolving them. Apart from being second largest economy China also has the second highest inequality in the world. These contradictions in the Chinese society are bound to erupt with renewed movements. The Xi regime will use nationalism, chauvinism and other means to distract the upsurge. The Chinese communist party that is neither communist nor a party, but its capitalist caricature dominated by corporate billionaires, will come down with brutal repression. But the largest working class aroused in a class struggle will be hard to crush. New class conflicts will explode. The socialist victory of the Chinese proletariat in the class war that looms large on the horizon, based on workers democracy and control, shall overthrow this parasitic Chinese elite desecrating ‘communism’. It will open up floodgates of revolutionary movements far beyond the frontiers of China.  Such a transformation shall spread the ideas and put forward the way-out of genuine revolutionary socialism for the emancipation of the human race.