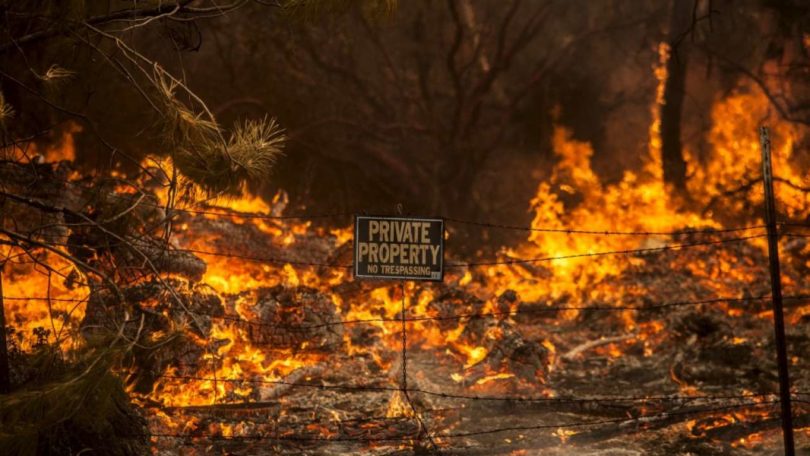 It is almost a surreal scene, an overcast sky, the constant smell of smoke in the air, and people walking down the street, even driving in their cars, wearing masks to alleviate some of the unpleasant affects of breathing in smoke-filled air.

That’s life in in the San Francisco Bay Area.

I went down to Monterey CA yesterday, just to get out for an overnight trip with a friend and the air down there was much nicer, less toxic. I returned today and the difference in air quality was significant.

The cause of this crisis is the worst fire in California history, what we call the Camp Fire in Butte County about 200 miles north east of where I live. At this writing, the fire has burned about 135,000 acres, destroyed 9000 structures and Paradise California, a town with a population of about 30,000. So far it is responsible for 56 deaths, with 130 or so people still missing (According to latest updates of CNN, 71  dead and 1011 are missing) . Fires are also raging in the south of the state and the celebrity community of Malibu has also been evacuated. I saw video of the Santa Monica mountains today that resembled Hiroshima. One person said there are no birds, no insects, no sounds, nothing.

The Butte County Camp Fire area is about 25% contained, according to media reports, and the area of the fire’s origin is closed off and is being investigated as a crime scene. The fire was traveling so fast that fire fighters were unable to fight it and it ended up primarily as a rescue operation. The cause of the fire is still under investigation. It is still undecided as to whether it was caused by human activity like a campfire or some other means.

A lawsuit has been filed by some of the victims against Pacific Gas and Electric, (PG&E) the state’s power utility. PG&E is an old established private, investor-owned energy supplier for much of central and northern California up to the Oregon border, and is regulated by the California Public Utilities Commission. Since the fires its stock price has tumbled.

PG&E has been sued and found responsible for fires in the past and although no determination has been reached, there is a lot of information coming to light that points in the direction of PG&E. The attorney for the plaintiffs in the recent suit said that there were complaints of problems with power lines before the fire started and there are witnesses to substantiate this, according to the media.

Initially, the Predator-in-Chief, Trump, blamed the fire and the spate of fires the state has endured, on the Forestry Service and bad management, “There is no reason for these massive, deadly and costly forest fires in California except that forest management is so poor,” he announced as the fire raged. Trump then threatened to withhold federal funds if there is no immediate “remedy” to this poor management.

The Wall Street Journal, perhaps the most important mouthpiece of US finance capital, while critical of Trump’s “rhetorical style” in an editorial earlier this week (“Mr. Trump has no empathy gene”) agrees with him. Extremely high winds and low moisture makes fired harder to contain the Journal says but “fuelling” the fires is an “overgrown government bureaucracy” .

Of course, the WSJ blames government bureaucracy, because then Trump’s remedy with which they agree, can provide the alternative they both desire, that the management of California’s vast lands should be in private hands. It should be, like all things, in the capitalist mode of production, an opportunity for profit making.

And it is not just the management of these lands that should be profit-making. Some 57% of California forestland is owned by the federal government: in other words, it is a public venture like the USPS, (post office) another highly-efficient public service. Education, the US mail, land management and land itself are all opportunities missed as far as the investor, the owner of capital, is concerned.

Pubic expenditure crowds out private capital and reduces opportunities for profits and capital accumulation. Successful public projects also tend to undermine the argument that only the private sector can provide jobs, can manage society, can provide the needs of society; it is a bad precedent. This type of expenditure is only good when it facilitates market activity like the building of the freeway system or rail that transport manufactured goods. Capitalism has to have an infrastructure that supports its economic activity and is reluctant to rely on the market.

So the Wall Street Journal points to the real culprit in all of this, ‘regulation’ and other curbs on market activity and profit making. That’s why they hate unions, they are also an obstacle of sorts to the free flow of capital, and the capitalists’ right to do what they want and when with their capital. This is what Trump wants but is incapable of articulating.

The Journal blames the “numerous” laws passed over the last 50 years that curb the capitalist’s freedom. Laws like the Endangered Species Act and National Environmental Policy Act. For the Wall Street Journal and the US capitalist class, it is these policies and the regulations and permits and other, what they call “bureaucratic” measures that are the root cause of these catastrophic fires that have ravaged and continue to ravage our state.

The Glaring Omission in the Wall Street Journal

The glaring omission in the WSJ editorial is climate change. There is not one word about that. These laws and what are actually fairly toothless regulations (OSHA is close to worthless in protecting workers on the job but the US Chamber of Commerce still opposed it), are to blame. The WSJ refers to them as “political blinders” but they are small restrictions on the rights of capital.

Paradise California has had just 0.88 inches of rain since May 1, compared with a historical average of over 7 inches during the same period tweeted James Sinko, a meteorologist at the Weather Channel. “If Northern California had received anywhere near the typical amount of autumn precipitation this year … explosive fire behaviour & stunning tragedy in #Paradise would almost certainly not have occurred,” wrote Daniel Swain, a climate scientist and researcher at UCLA.

So no matter what way one looks at it, the root cause of these catastrophic events is capitalism and how society is organized. How we produce the necessities of life. On the one hand there is climate change and all the by products of this that we should be familiar with by now. Where humans live. How cities and our communities are built and where they are built is all determined by planners and experts acting on behalf of owners of capital, investors and their political parties and representatives. The more people want to escape urban life and go live in the forest the more likelihood there is of fire and one of the riskiest additions to this living is the need for a power supply. Gas and electricity have to be brought to these communities.

Pacific Gas and Electric is a for-profit corporation and in all such activity, profit is paramount. Some utilities shut off power in extreme weather conditions in order to lessen the chance of fires, but PG&E never did this until recently. According to CNBC, the attorney for Camp Fire victims claims that “….PG&E sent out emails indicating it would shut off power before the Camp Fire but didn’t do it. Their meteorologists were watching the conditions, and then they decided not to,” he said. “They decided to leave the power on.” The attorney told CNBC that , “PG&E does not want to shut off power for the reason that management bonuses are tied not to safety, but rather the lack of customer complaints,” When people are told their power is about to be shut off they complain which makes management hesitant to do so. Profit comes first.

There is no doubt that bureaucracy in the public sector comes with problems, mostly due to its having to function within the capitalist system, as opposed to working under the democratic ownership and control of workers and consumers…But a society’s energy needs should not be in private hands. Like health care, education, transportation and other important social needs, the profit motive is a huge barrier to providing them.

Like the catastrophic hurricanes we are experiencing, these fires are not “acts of God” or a problem of regulation or environmental legislation aimed at protecting plant or animal life including our own, they are products of an inefficient, wasteful and bankrupt system of social organization. I am not a climate scientist, but I am aware that through time, the planet has gone through climate patterns, some extreme, some gradual. But what we are witnessing is different. The changes that are threatening to end life as we know it on this planet are occurring as a direct result of human intervention. They are a by product of human activity, not in general, but specifically as part of a system of production that is incompatible with human life and all life that has arisen and existed up till now.

This is one lesson we must draw from these crises and the other is that we cannot sit idly by if we love our children and our grandchildren. We owe it to them, we are obligated to them, to act to change the system and to build a new world in which we can live in harmony with each other and the natural world that gave us life.