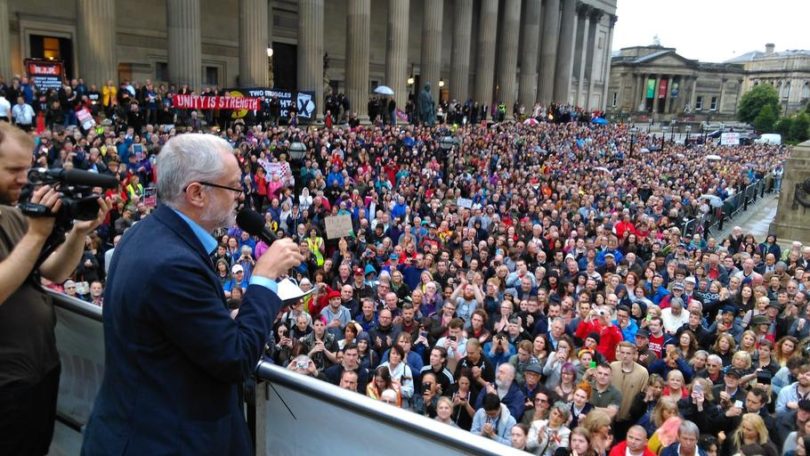 We are living in the most volatile of times. As the relatively stable prevailing world order of the last few decades passes away, sudden shocks and sharp swings to the right and left rock one country after another. The latest example of this is yesterday’s general election in Britain, the strangest in its long history.

The first surprise was the fact that it took place at all. The incumbent prime minister Theresa May proclaimed it on a mere random whim. She had only taken office less than a year ago, in the whirlwind aftermath of a previous bombshell, the totally unexpected referendum victory of the maverick jingoistic Brexit faction of the establishment.

In the old days of the British Empire in the 19th century, it used to be said that the British ruling class was accustomed to planning for decades and even centuries ahead. This befitted the needs of the world’s dominant power, hovering and balancing between rival foes and allies in its eternal quest for power, prestige and stability. In its hobbled status after the Second World War as a subordinate of US imperialism, it enjoyed severely reduced margins for the manoeuvre which limited its horizons to a couple of years at most. By now, however, its political agents can see no further than their own noses, operating from day to day with no more than a makeshift box of improvised underhand tricks.

Thus, in an act of supreme irresponsibility, in response to unscrupulous chauvinistic critics of his concessions to the European Union (the cheap populists of UKIP and the Tory party’s own lower ranks), the previous Old Etonian “toff” prime minister David Cameron had frivolously gambled away the whole strategic interests of his class by rashly fobbing them off with the promise of a referendum, without having the slightest inkling of how to win it. He lost the referendum, and the very next day he simply resigned and walked away, leaving his ministers to clear up the mess.

The highest circles of British capitalism know that their best interests lie in remaining in the EU, which after all offers them free access to lucrative markets and a ready supply of cheap labour. But Cameron’s successor Theresa May, previously a ‘Remainer’, dared not challenge the clique of cynical media magnates who manipulate “public opinion”, and overnight became a champion of a “hard Brexit”.

May tries hard to model herself on the Tory 1980s icon Margaret Thatcher – a decisive leader of her class, who had single-handedly privatised whole swathes of the economy, destroyed its manufacturing base and ruthlessly tamed the trade unions. It was a laughable facade. Mimicking Thatcher’s shrill voice and imperious tone, but lacking any trace of her strategic vision or will-power, May looks like nothing more than a pantomime puppet, a cardboard cut-out parody of the “iron lady”. 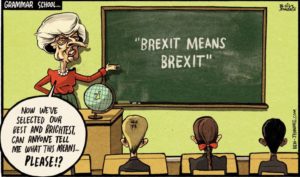 Finding herself precariously perched in the chair of the prime minister, May insisted that she would remain in office at least until her first term expired in 2020; there would be no election. She reduced herself to constantly parroting hollow platitudes (“Brexit means Brexit”, “no deal is better than a bad deal”, “strong and stable government”…). But opinion polls were giving the Tories a huge lead of up to 25 percentage points, translating to a landslide majority of 100-150. After repeating time and again that she would not call a new election, May impulsively yielded to the temptation of an easy landslide victory, justifying her opportunist U-turn with feeble waffle about the need for a “strong mandate” ahead of the coming Brexit negotiations. Lacking any clear programme and fearful of exposing her emptiness to the glare of public scrutiny, May then locked herself away in hiding, shunning public exposure, refusing to participate in TV debates, addressing only secretly convened “public meetings” staged in front of sycophantic hand-picked audiences.

Meanwhile, a newly revived and radicalised Labour Party was flexing its muscles. Following Labour’s second successive defeat in the 2015 general election, the left Labour MP Jeremy Corbyn had won the Labour leadership on the crest of a popular mass movement numbering hundreds of thousands. Last year he reaffirmed his victory even more spectacularly after an abortive challenge by a residual clique of unreconstructed Blairites. Rupert Murdoch and his fellow media moguls had been mercilessly hounding Corbyn with unremitting smears and sneers and blacked out all news outlets for his programme.

Another factor, which was exploited to the utmost by the gutter press, was the two murderous terrorist atrocities committed in the run-up to the elections. As previously in France, Spain and elsewhere, fascists (in this case of the Islamic brand) were committing atrocities in an effort to destabilise the elections and provoke a stampede to the right. Knowing that a Labour victory under Corbyn could offer young people real educational opportunities and worthwhile jobs, they were hell-bent on preventing it, because that would at last give young Muslims hope, and thus eat into their potential support base. The media hyped up Corbyn’s alleged former “friendship” with IRA and Hamas members to depict him as a bloodthirsty terrorist sympathiser (while simultaneously denouncing him for his opposition to the Trident nuclear programme and his admitted refusal to press the nuclear button). The Daily Mail published 13 pages of this dirty propaganda. Yet in the event, all the Tory rags’ dirty propaganda put together had zero effect in blunting Labour’s appeal, especially to the youth. 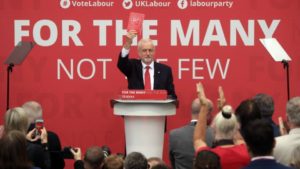 Once the election was called, however, while maintaining as before an unremitting barrage of distortion and vitriolic abuse against Corbyn, the media were nevertheless obliged to give some airspace to Labour’s programme. Labour’s most radical manifesto since 1945 included an end to austerity, defence of the National Health Service, abolition of student tuition fees, a public housing programme, restoration of school funding cuts, nationalisation of major public utilities, long-overdue rises in public sector pay, and many other fundamental reforms, all to be funded by a rise in corporation tax and higher income taxes on the rich. This programme gained enormous popularity. Corbyn addressed enthusiastic mass rallies up and down the country. Young people, habitually hard to register and motivate for elections, mobilised in massive numbers. 70% of voters aged 18-24 supported Labour. It was Labour’s success in inspiring the youth and other normally apathetic strata of the electorate, which swung the election for Labour.

Now May finds herself in a hopeless trap. She had confined her propaganda slogans to a bunch of alliterative mantras, shrilly repeating the need for “strong stable government” and warning of the dangers of a “coalition of chaos”. These have spectacularly backfired on her. No government could be weaker or more unstable than May’s new “coalition of chaos” with the ultra-right DUP, a sexist homophobic creationist party responsible for inflaming murderous hatred over 25 years of sectarian bigotry in Northern Ireland. No one expects this desperate gambit to last. All it will take is one parliamentary defection or one lost by-election to bring the government crashing to defeat.

Corbyn’s enemies in the Parliamentary Labour Party are temporarily immobilised. Along with the BBC and the private media barons, many Blairite MPs had openly dissociated themselves from Corbyn and denounced him as “unelectable”, even while campaigning for re-election as Labour MPs. Now many of them are falling over each other to eat their words, eager to grovel and ingratiate themselves with Britain’s next prime minister. Yet the long-overdue split with the relics of New Labour is imminent, either in the form of a new and futile challenge against Corbyn, or a clean breakaway by the Blairites to form an anti-Brexit coalition together with the Lib-Dems and the Cameron/Osborne wing of the Tory Party. There is, after all, a vacuum, now all the more so now: a space for a party representing the true interests of the ruling class.

The plight of the Tory Party today is best summed up by the anonymous comment of one Tory MP quoted in the Daily Mail: “We all fucking hate her. But there is nothing we can do. She has totally fucked us'”. That could be the epitaph of the British ruling class after this election.