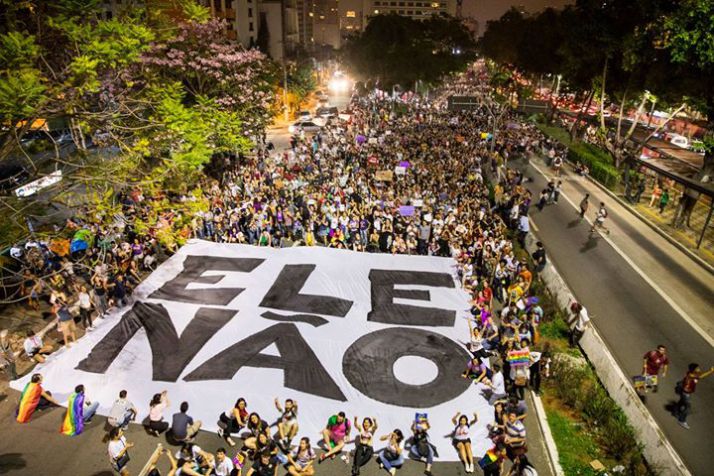 At the same day that the presidential candidate Jair Bolsonaro left the Albert Einstein Hospital (São Paulo), where he was recovering from a stabbing attack, crowds took the streets to attend the “United Women against Bolsonaro” movement, a massive countrywide demonstration against his reactionary candidacy and the neo-fascist extreme right.

It was one of the largest national events in Brazilian recent history. The figures are not so accurate, but it can be stated with certainty that the amount of people in the capital cities demonstrations approaches 1 million. We still need to consider the hundreds of other Brazilian cities and towns where the protests took place and the more than 60 abroad. Undoubtedly, a “sea of people” took to the streets against the neo-Fascism. The 29th of September was definitely a historical milestone. A lot will be written in the future about its relevance in Brazilian history and reality. Now, we would like to highlight some points that need to be remarked.

Women in the Frontline

It’s not a coincidence that the women led the beautiful movement on the 29th. The women’s protagonism has been seen in several struggles, all around the world, recently. For example, in Argentina and Spanish State. In particular, the close connection between the Brazilian struggle against Bolsonaro and the massive women’s demonstrations against Trump in the United States is most important. It’s not new in Brazil’s recent history, as previously seen in the growth of the 8th of March demonstrations and the feminist spring which defeated the corrupt and reactionary former Head of Parliament ‘Eduardo Cunha’ and against the Constitutional Amendment 5069. Their struggles are showing the way. In 2017, the women’s mobilizations were the preparation for the great working class struggle, culminating in the April General Strike against the austerity agenda and the reactionary reforms of the illegitimate Michel Temer’s government.

That’s what is the most important. Women in the vanguard don’t mean the isolation or exclusivity, because the large crowds of the working people go along with them, also the youth and the oppressed groups. Those demonstrations also marked by the fight against homophobia and racism, by the trans-agenda, by the struggle of all of us who are targets of the neo-fascist menace. As it was written on several placards, “If it hurts our existence, we will be the resistance.”

A Demonstration with an Unprecedented Character

It was a day that will be marked in our memory and consciousness for many years. It is difficult to spot a movement like that in the Brazilian history, because of its gigantic dimension, and a few days before the national election. Usually, in elections times, the attention is focused on the candidates and, at most, large rallies take place in support of specific campaigns.

The S-29 demonstrations are remarkable because they aim to interfere, positively and directly, in the presidential elections dispute. They tried to change the negative impact of Bolsonaro and his agenda of growth. All of that outside the control of any party or candidacy. This example of unity must always be with us, for our future struggles.

Hegemony of a Progressive and Left-Wing Agenda

In the days before the protests, some left groups mistakenly spoke of the risks that the demonstrations would be used by the traditional right wing, especially by Alckmin’s PSDB, to gain electoral momentum. Huge mistake! It is important to note that they were unitary, convened and built by broad sectors. But whoever was on the streets on the 29th, across the whole country, saw a broad hegemony of the left-wing slogans and agenda.

The overwhelming majority of the attendance had no partisan option, but the great presence of left-wing militants and their main slogans were very well noticed. The defence of democratic freedoms, the repudiation of oppression, the defence of social and labour rights, investment in good public services, the repudiation of Temer’s anti-popular acts, and the phrase “dictatorship never again” were in the frontline.

It is impossible to imagine that it is the old right-wing to benefit politically from such a movement on the left. Poor media coverage has been given to the movement and even the images have been manipulated by the mainstream channels, that’s very different from the coverage given to the manifestations of the “yellow shirts” (Bolsonaro supporters).

With great joy, we should celebrate that the left has once again gained the hegemony of street demonstrations, which should always be our main stage, and also the enormous sympathy and receptivity to the PSOL candidates and proposals. These are the fruits of a correct application of the united front strategy in this spectacular mobilization.

The Impacts on the Brazilian Political Landscape

It’s too early to get all the conclusions and lessons from the 29th. But, sure enough, that’s a day to be celebrated for many years. We have no doubt of the great importance of Bolsonaro’s defeat at the polls, if possible not letting or even reaching the second round. We will be doing our best in this last week of the campaign. One thing is certain: we can be sure that the struggle against the neo-fascist right-wing in Brazil will not be just an electoral fight!

After this new “women’s spring”, we know that this struggle will be fought mainly on the streets, with demonstrations that prevent the reactionary and conservative escalation represented by Bolsonaro and his allies. No freedom for the enemies of freedom.

The movement “United Women against Bolsonaro” is already discussing a new day for national demonstrations. It is very important that this fight goes on, to defeat Bolsonaro in the streets and by the ballots.

The Importance of Voting for Women

We are only a week away from the elections day. That cannot be ignored. The impulse of the acts must be harnessed to the maximum to advance in another very important fight – to overcome the nefarious underrepresentation of the women in the Brazilian politics.

Just to give examples of this absurdity: out of 513 federal MPs, only 54 are women (about 10%). The same is true for black, indigenous and LGBT representation. Out of the 513 federal deputies, we now have only one LGBT. In an international ranking of women’s political representation, with 192 countries, Brazil occupies the shameful 152nd place. In the Legislative Assembly of Rio de Janeiro, of the 70 parliamentarians, only eight are women. Exactly where Marielle Franco (PSOL), the fifth most voted city councillor in the capital, was summarily executed six months ago, in a clearly political crime, and still unsolved. A shame!

It is not just about defending women’s votes. But to affirm the importance of electing women, who identify the causes and guidelines that have been taken in the protests of the 29th. For that the reason, in the last week of the campaign, we are going to the streets, squares, places of work, schools and housing areas to affirm loudly: “help to elect a woman of our people”, “choose women from the left”, ” live the seed planted by Marielle”, among many other ideas in favour of the end of horrendous prejudice and intolerable violence against women, black people and LGBT. And be sure that this movement can be an important point of support to continue the struggle in defence of the rights and conquests of the entire working class and the Brazilian people, that has been brutally attacked by the illegitimate Temer. Again, with the women ahead, until the victory!