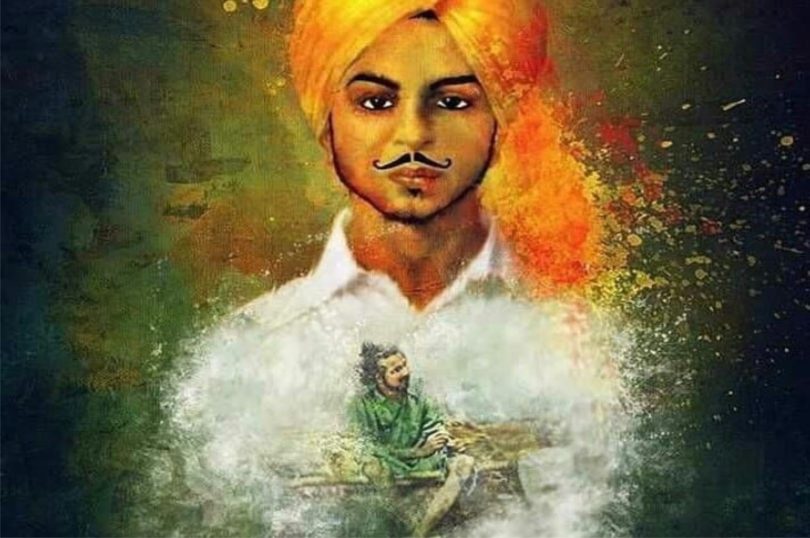 On 23rd March 1931 Bhagat Singh along with his comrades Sukhdev and Raj Guru were hanged, their bodies burned, mutilated and stuffed in gunny bags were thrown at the banks of River Sutlej, miles away from the Lahore Central Jail. Today no memorial or commemorative plaques of these heroic revolutionaries exist at the site of their execution. Yet their revolutionary legacy lives on. For more than nine decades comrade Bhagat Singh’s struggle and revolutionary inspiration have galvanized millions of youth and ordinary souls throughout the Indian Subcontinent and beyond. His revolutionary struggle became so forceful in the stormy 1920’s that the native bourgeois leaders at the helm of the national liberation movement felt threatened. His popularity was at its peak. Sir Horace Williamson, Director of British India’s Intelligence Bureau at the time, reported: “His photograph was on sale in every city and township and for a time (Bhagat Singh) rivalled in popularity of Mr Gandhi himself.”

The orders of his execution by the Viceroy of India Lord Irwin had a tacit approval of Mahatma Gandhi. The Gandhi-Irwin Pact was signed on March 5, 1931 while the executions were carried out just days in its aftermath. Gandhi had remarked on his killing, “The government certainly had the right to hang these men. However, there are some rights which do credit to those who possess them only if they are enjoyed in name only.” There was sorrow throughout the subcontinent at these executions. The New York Times had reported, “(There is a) reign of terror in the city of Cawnpore in the United Provinces and an attack on Gandhi by the youth outside Karachi was amongst the answers of the Indian ‘extremists’ today to the hanging of Bhagat Singh and two fellow assassins.”

The year 1907 was marked by the political upsurge in Punjab against the 1905 Partition of Bengal and the ‘Land Colonization Act’. Lyallpur, the canal colony town set up by the British Raj had become the nucleus of that revolt. Bhagat Singh was born on 28th September of the same year in this district and was named “Bhaganwala” or ‘The lucky one’. Bhagat Singh was enrolled in the Dayanand Anglo-Vedic (D.A.V.) High School. On 14th April 1919, when he was 12 years old, Singh visited the site of Jallianwala Bagh massacre hours after thousands of unarmed people gathered at a public meeting were killed. This mass slaughter took place at Jallianwala Bagh in Amritsar. This Bagh has become an enclave where these oppressed people were surrounded by buildings on three sides while forces under the command of General Dyer ambushed them and Dyer ordered shoot to kill. Bhagat Singh collected some blood-soaked mud from the Bagh inside a small glass jar and the incident left deep scars in his mind. Singh became disillusioned with Mahatma Gandhi’s philosophy of non-violence after he called off the non-co-operation movement against the British on the pretext that Indian soldiers had fired at their British superior officers who were ordering them to shoot unarmed protesters at Chauri Chaura in the Gorakhpur district of the United Provinces in British India on 5 February 1922.

Bhagat Singh joined the National College Lahore in 1923, where his political education and revolutionary activism rapidly advanced. He studied and was deeply influenced by the revolutionary movements in the subcontinent. The Kuka movement of 1872, Ghadar party’s clandestine armed struggle against imperialists in 1914-15 and the Babbar-Akali uprising of the1920s in Punjab had deep impacts on Bhagat’s thought. Ghadar party’s leader and legendary hero Kartar Singh Sarabha became his ideal icon.

Bhagat Singh joined the HRA (Hindustan Revolutionary Association/Army) in 1923-24. The Kakori Train ‘Robbery’ planned and executed by the HRA activists on 9th August 1925 was mainly to raise funds for their revolutionary organisation although Bhagat Singh was not actively involved in that action. All leading activists of the HRA except Chandra Shekhar Azad were arrested. Bhagat Singh attended the court proceedings of the Kakori case as a journalist from an Akali paper, published from Amritsar. In December 1927, four of the Kakori accused: Ram Prasad Bismil, Ashfaqullah Khan, Thakur Raushan Singh and Rajendranath Lahiri, were hanged. This proved to be a major turning point in Bhagat Singh’s life and struggle. Bhagat Singh’s increased militant activities and his influence on youth led to his first arrest in May 1927 on the pretext of a bombing that had taken place in Lahore in October 1926. In 1928 Bhagat Singh after being convinced of the ideas of revolutionary socialism played a key role in changing the name of the party, HRA to HSRA (Hindustan Socialist Revolutionary Army).

In November 1928 at a protest against the Simon Commission in Lahore the police violence took the life of Lala Lajpat Rai, a leader of the liberation movement. The HSRA vowed to take revenge. Bhagat Singh along with his comrades Shivaram Rajguru, Sukhdev Thapar, and Chandrashekar Azad shot and killed John P. Saunders, an Assistant Superintendent of Police and managed to escape from Lahore on 17 December 1928. However on 15 April 1929, the police arrested Bhagat Singh, Sukhdev, Rajguru, and 21 others and were charged with the Saunders murder, Assembly bombing of 1929, and bomb manufacture.

During their imprisonment, Bhagat Singh and his comrades continued their protest and studied revolutions thoroughly. The Bolshevik revolution in Russia had transformed them politically. Bhagat wrote, “I studied Bakunin, the anarchist leader, something of Marx the father of Communism, and much of Lenin, Trotsky and others, the men who had successfully carried out a revolution.” (Why I am an Atheist, October 1930)

The whole concept of a successful socialist revolution had gone through a sea change in their political thinking. In ‘A Letter to Young Political Workers’ dated, February 2, 1931 Bhagat Singh wrote;

“Revolution means the complete overthrow of the existing social order and its replacement with the socialist order. For that purpose, our immediate aim is the achievement of power… the state, the government machinery is just a weapon in the hands of the ruling class to further and safeguard its interest. We want to snatch and handle it to utilise it for the consummation of our ideal, i.e., social reconstruction on new, i.e., Marxist, basis…. All along we have to educate the masses and to create a favourable atmosphere for our social programme. In the struggles, we can best train and educate them… but if you approach the peasants and labourers to enlist their active support, let me tell you that they are not going to be fooled by any sentimental talk. They ask you quite candidly: what are they going to gain by your revolution, for which you demand their sacrifices? what difference does it make to them whether Lord Reading is the head of the Indian government or Sir Purshotamdas Thakordas? What difference for a peasant if Sir Tej Bahadur Sapru replaces Lord Irwin! It is useless to appeal to his national sentiment. You shall have to mean seriously and to make him understand that the revolution is going to be his and only for his good. The Revolution of the proletariat and for the proletariat… We require, to use the term so dear to Lenin – the “professional revolutionaries”.

Their passion and belief in the socialist emancipation of humanity was vividly expressed in their Delhi Court Statement on June 6th, 1929. Bhagat Singh and B. K. Dutt had stated, “The whole edifice of this civilization, if not saved in time, shall crumble. A radical change, therefore, is necessary and it is the duty of those who realize it to reorganize society on the socialistic basis. Unless this is done and the exploitation of man by man and of nations by nations is brought to an end, sufferings and carnage with which humanity is threatened today cannot be prevented. All talk of ending the war and ushering in an era of universal peace is undisguised hypocrisy.” Bhagat Singh and his comrades had gone to the gallows with their heads held high, singing revolutionary songs. They gave their lives for a greater cause but their unfinished struggle is a challenge posed by history for today’s generation to redeem that struggle and fight to the finish—a victorious socialist revolution.