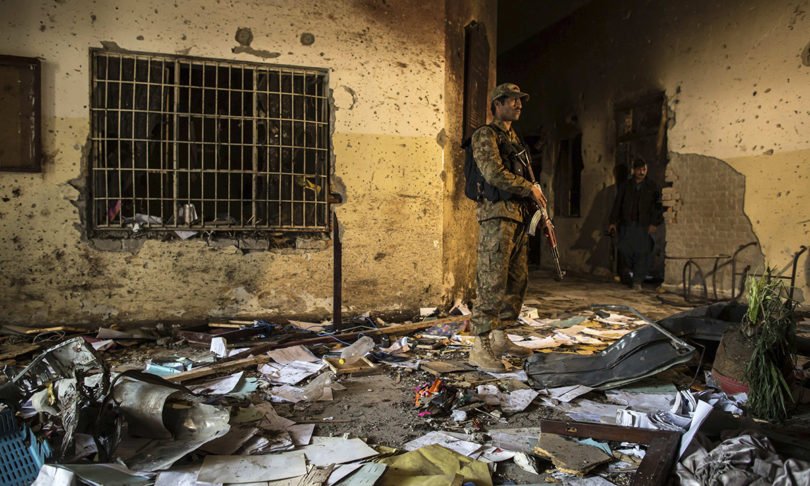 The massacre of 141 people, including 132 children, by the Islamic fundamentalist Taliban at the Peshawar Army Public School is probably the most heinous barbarity ever seen in Pakistan. It is an exception to the norm of a society that is the victim of a terrorist scourge for decades. The main reason cited for this atrocity was the ongoing military operation in North Waziristan. However, before this operation started, the main commanders and masterminds of terrorist outfits fled to Afghanistan or to other areas. This speaks volumes about the penetration of these reactionary forces into the structures of state institutions.

The roots of this prevalent Islamic terrorism lie in the reactionary nature of Pakistan’s ruling class and its dependency on these Islamic forces to perpetuate their exploitative and repressive rule. It is not an accident that most terrorists involved in bestial crimes go scot-free from our courts. It is ironic, if not despicable, that the day after the Peshawar bestiality, the mastermind of the November 2008 Bombay carnage, Zakiur Rehman Lakhvi, was bailed by an anti-terrorism court. Most of the judiciary, especially at the middle level, is comprised of personnel that are in fact followers of these reactionary doctrines. A police guard who assassinated Salmaan Taseer, a serving governor of Punjab, was showered with flower petals by the lawyers at his court appearance and is yet to be prosecuted for the crime.

The most disgusting argument from the imposed intelligentsia of the political elite is to create a distinction between the so-called moderate and extremist Muslims. However, experience has shown that the ‘moderates’ can become ‘extremists’ and extremists become moderates in quick succession. Leaders of terrorist organisations with a bounty of millions of dollars move about freely and address public meetings frequently without any fear, equipped with high- level security provided by sections of the state. Successive Pakistani regimes are in such servitude to these Islamic politicians that even the peace process with India is put at stake for them.

The Tableeghi Jamaat has millions of followers and is portrayed by the state and media as a ‘moderate’ movement. In a recent book, Pakistan: A New History, Ian Talbot reveals that this religious outfit was responsible for the Madrid and London train bombings that killed and maimed dozens of innocent people. Its annual congregation in Raiwind is attended by more than half a million people and includes judges, military and civilian bureaucrats, politicians, journalists, celebrities and some of the most wanted terrorists, such as Riaz Basra. The same was the case during the debacle of the Lal Masjid (red mosque) and the notorious Jamia Hafza, a women’s seminary that bred and trained Islamic fundamentalist vigilantes and terrorists in the heart of Islamabad. These female vigilantes and clerics from the mosque terrorised the capital. When Maulana Abdul Aziz, Lal Masjid’s khateeb, was captured he was not only allowed to go free but ended up being a cheerleader for the terrorists on a plethora of television channels. He escaped the operation launched by Musharraf in a burqa, now a brand mark of his infamy. He has outrightly refused to condemn the Peshawar barbarity; rather he has posted harrowing comments on this cruelty, calling it “revenge”. These examples show the power of those proxy actors of rogue agencies that are answerable to none and act with impunity. Even the US imperialists have tacitly accepted this status quo.

It was General Zia who took the theocratic basis of establishing this state to new extremes to perpetuate his brutal Islamisation and despotic rule. This was carried out under the supervision of the CIA and Saudi intelligence agencies for the sole purpose of recruitment of religious fanatics to the infamous dollar jihad at the behest of the US imperialists. Both Nawaz Sharif and, regrettably, Benazir Bhutto continued the process in the 1990s. However, to finance the Afghan jihad, the CIA introduced heroin production and smuggling that continued after the withdrawal of Soviet troops and the departure of the US from the region. This trade now includes heinous, profitable crimes and has generated a mammoth black economy that is more than twice Pakistan’s formal economy. It funds various terrorist outfits that have become Frankenstein’s monsters for their local state mentors and the imperialists. Drug dollars have created conflicts between various factions leading to internecine wars amongst themselves. In order to ensure the continuous flow of their bounty, the terror becomes more brutal, heinous and bestial. The more ferocious a terrorist act, the more marketing and clientele its brand begets for servicing criminal acts. These friend-turned-foe terrorist outfits are more perilous for the state as they are well aware of it’s strategic and logistical plans and whereabouts.

The condemnation by Narendra Modi reeks of cynical hypocrisy. He is a product of Hindu fundamentalism and his support base amongst the Indian petit bourgeoisie and primitive sections of society is based on this religious bigotry and narrow national chauvinism. John Kerry and David Cameron’s condemnations are equally duplicitous. These imperialist powers were the ones that engineered and fabricated this modern Islamic fundamentalism. They never hesitated to use them for terrorising left wing forces from Egypt and Pakistan to Indonesia and Afghanistan in the past and now in Libya and Syria.

Is this not also true of Pakistan’s ruling political elite and the parties that are exponents of this regressive and petrifying capitalism in Pakistan? The failure of Pakistan’s ruling classes to complete any of the tasks of the capitalist revolution and socially traumatising decay of this system under their corrupt rule is the actual root cause of this terrorism. This barbaric fundamentalism is what Trotsky called, “the distilled essence of this putrid capitalism”. The black economy has now penetrated the state, politics, capitalist and feudal elite. These Mafiosi bosses are now dominant sections of this country’s ruling class. Hence, the All Parties Conference has come out only with the formation of yet another ‘committee’ to devise a strategy to combat terrorism. This would be hilarious were the agony of this episode not so ghastly.

A malaise has set into society under these dark clouds of reaction. Social, ethical, moral and cultural values have rotted. An asphyxiating atmosphere stifles society. Still, there is a silver lining on the horizon. There have been several movements of the workers and the youth, from the gas and oil workers to the nurses and doctors’ struggles. In Waziristan itself, the recent victorious movement of ordinary masses led by a Marxist activist, Ali Wazir, illustrates that in the most arduous of situations, struggles of the oppressed can be fought and won. Within the existing capitalist system, Pakistan is doomed. Not even minimal reforms can be implemented, what to say of eliminating terrorism? The great Marxist teacher, Fredrick Engels, said almost a century ago, “In a hundred years humanity will be confronted with two choices, socialism or barbarism.” It is high time to make the choice.