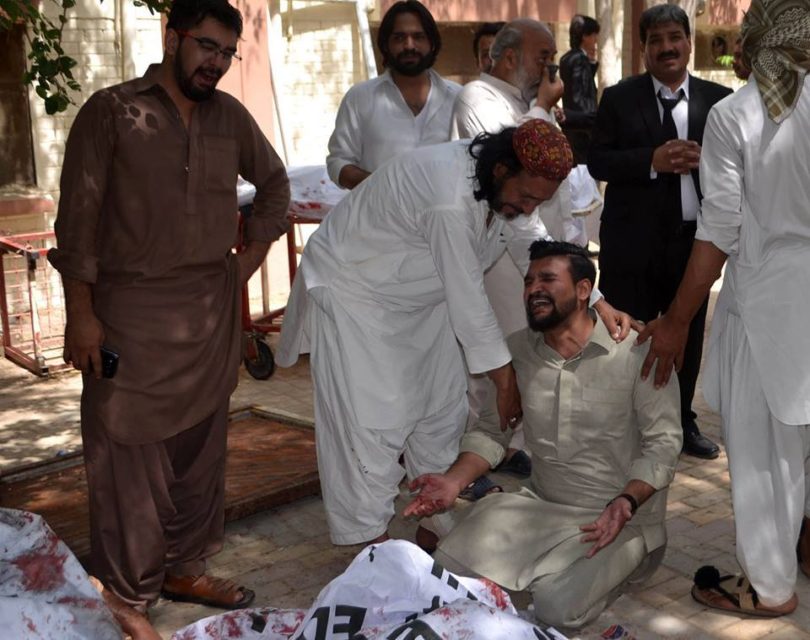 The August 8th harrowing terrorist attack in Quetta has yet again brought to the fore the misery and mayhem in Baluchistan. Islamic State and Jamat-ul-Ahrar, a splinter group of the Pakistani Taliban claimed responsibility for the attack that killed at least 70 people and injured and maimed hundreds. This was a premeditated attack to inflict maximum damage to Balochistan most prominent lawyers who had congregated at the hospital’s emergency department to mourn a colleague Bilal Kasi, the President of the Balochistan Bar Association who was shot dead earlier in the day in a deliberate and targeted attack.

Targeted murders do not take place in isolation or vacuum. They are direct result of the objective economic, social and political necessities. It is important to know who the beneficiary of such a heinous acts are. Many of the lawyers killed were an active voice in raising the plight of the missing Baloch youth and activists. They boycotted courts for missing people, they contested litigations for political workers without any fee and they refused to bow down against the wrongdoings, and perhaps that’s the reason why they are no more!

Aljazeera reported, “The Tehreek-e-Taliban Pakistan Jamaat-ul-Ahrar takes responsibility for this attack, and pledges to continue carrying out such attacks. We will release a video report on this soon,” the group’s spokesman Ehsanullah Ehsan said in an email. ISIL, which is also known as ISIS, also claimed responsibility for the attack. “A martyr from the Islamic State [of Iraq and the Levant] detonated his explosive belt at a gathering of justice ministry employees and Pakistani policemen in the city of Quetta,” the armed group’s Amaq website said.

However, the Pakistani regime, the state and a large section of the right wing corporate media have been pointing fingers across the Radcliffe line. According to the media reports, “Top civil and military leadership believed that Monday`s suicide attack at the Civil Hospital was actually an attempt by the `enemies of the country` to sabotage the on-going China-Pakistan Economic Corridor (CPEC) project.” The prime minister said, “No doubt in my mind that enemies of Pakistan are after the CPEC… the Pakistan Army under the leadership of Gen Raheel was doing a commendable job to neutralise the security threat towards CPEC.”

Baluchistan has been through the longest civil war in Pakistan. The main rebellious insurgency in the past was that Baluch nationalists wanted independence from Pakistan. There have been four major uprisings of the nationalist insurgency. The first revolt erupted in 1948 while the ongoing nationalist armed insurgency started in 2003. In the past particularly in the seventies this armed struggle was based on a progressive ideology and linking itself to socialism and overthrow of the ruling elites. However, in the recent period it has been reduced to bourgeois nationalism and eliminated the ideology of socio-economic transformation from the nationalist movement.

The chief minister of Baluchistan, Sanaullah Zehri immediately accused the Indian intelligence agency, RAW of being behind the attack. The right wing and religious media anchors echoed this implication in their vociferous chauvinist propaganda and it seemed as if they were trying to exonerate the religious fundamentalism from this vicious tragedy. Even the Pakistani bourgeois main representative newspaper had to accept the religious fundamentalisms involvement in this heinous act of terror. It’s 9th August editorial wrote, “Violence in Baluchistan is multifaceted and perpetrated by a variety of actors, including separatists, religious extremists and others, but the modus operandi in this case appears to indicate the involvement of religious extremists.”

There is no doubt that the agencies of the belligerent Indian and Pakistani states are involved in several acts of sabotage perpetrated in the two nuclear neighbours. No less than the former president of Pakistan and military’s chief general Pervaiz Musharraf confessed this covert war of the intelligence agencies in an interview given to the Guardian in February 2015. Musharraf said, “Pakistan had its own proxies; India had its proxies, which is unhealthy. I do admit this is most unhealthy. It is not in favour of Afghanistan, or Pakistan or India. It must stop,” he said. “The RAW of India, the ISI of Pakistan have always been fighting against each other since our independence. That is how it continued, it continues now also.”

However, it’s not only the Indian reactionary state that is involved in the mayhem in Baluchistan. Ever since the discovery of large deposits of precious mineral and hydrocarbon resources in Baluchistan the world imperialist corporations and the regional states with imperialist designs have avalanched upon Baluchistan like vultures to plunder its resources and occupy indirectly it’s geopolitical and commercial strategic locations. It’s the inhabitants of this tragic land rich in resources that have suffered the brunt of its riches and strategic importance at the hands of these ‘investor vultures’ and aggressive states.

It is the youth who are spearheading the armed struggle for their and the Baluchi masses emancipation from the deprivation and misery from this oppressive and exploitative system and the state. However the nationalist movement has been weakened in those sectors where the imperialist forces have been able to penetrate the leaderships in their deceptive support which in fact was to use these movements as their bargaining pawns with the state and other stake holders in Baluchistan.

The Islamic fundamentalist and religious sectarianism is a relatively recent creation in the dynamics of the conflict in Baluchistan. On one hand fundamentalism has been used to undermine the nationalist insurgency and on the other it has been propped up by the Shia and the Wahabi regimes of Iran and Saudi Arabia for their interventions for achieving vested interests. The brutal mass slaughter of the Hazara Shia’s in the last few years was the result of these proxy conflicts of sectarianism. This sectarian terror has a modus operandi that has all the hallmarks of the vicious mass murder of August 8th. These ‘Islamic’ regimes want their hegemony and they cannot only operate through their respective sectarian clergies but they also need sections within the state and political structures to infiltrate. The massive funding of these theocratic states to promote this sectarian bloodshed for their hegemony has traumatised and pulverised the oppressed people of Baluchistan.

However, Islamic fundamentalism as a weapon to defend capitalism and imperialist interests was mainly infiltrated in this region by the US imperialists to crush the Saur revolution in Afghanistan. It was later used as a Jihad against the ‘Soviet Empire’ as an alibi. Zbigniew Brzezinski, president Carter’s national security adviser, said in a response to a question asked by a French newspaper, why he had created these fundamentalist vigilantes said, “it was more important to bring down the Soviet empire than to worry about “a few stirred-up Muslims”. Now the chickens have come home to roost. It’s not just in Afghanistan that this menace has ruined a lively and rich culture but throughout the region and even in the Middle East this virulent plague has ravaged societies and great civilisations. Now it is threatening the shores and centres of Europe.

Apart from the US and the European imperialist interventions the Chinese have now the largest stakes in this beleaguered region. They have taken over the Gawadar port and have access to Baluchistan’s gold and copper mines. The western imperialists are not happy with this arrangement between the Pakistani and the Chinese states and hence there is another proxy war that has been brewing for some years in Baluchistan. How could the wily and lustful Indian state remain aloof in this bloody orgy of corporate and state plunder? Apart from the financial interests the Indian army’s main basis of large funding and the fifth highest military spending in the world is its continuum of hostility with Pakistan and vice versa.

In addition to this Islamic sectarian terrorism, Baluchistan’s inhabitants have been the victims of state and non-state actors’ violence for generations. In the last few years There have been innumerable ‘missing persons’ and mutilated bodies of political activists thrown in the wilderness of this primitive region, that were try to fight for their basic rights in a method that was the only availability to them at the time. The main problem with the nationalist leaders that they have failed to mobilise the masses as we are seeing in the Indian Occupied Kashmir that has shaken the echelons of the mighty Indian state with its own imperialist designs. This is due to the divisions in the leadership due to the penetrations of the imperialist and the state agencies.

Terrorism in whatever form targets the oppressed and the dispossessed as its first victims. It gives justification to the oppression of the state and the terrorist sans ideologies become syndicates of crime and extortionist mafias. It’s not that there has been very little if any mass mobilisations against the state and non-state atrocities in Baluchistan but in the rest of Pakistan these has been a meagre support for the oppressed masses of the region. One of the main reasons has been the relative collapse of the left leaderships and there has been certain inertia in the mass movement for some time now. The struggle on a class basis against the exploitative system and its oppressive state has also suffered due to the trauma the toiling classes have suffered due to the intensive and agonising terrorist onslaught. The masses throughout Pakistan have been subjected to socio-economic exploitation, misery, poverty and deprivation. Terrorism and oppression are an insult upon injuries of the working classes. But this situation and the inertia shall not last for long.

The nationalist movement leaders in Baluchistan have also been reluctant from trying to link the national liberation struggle to the class struggle in the rest of Pakistan and the south Asian region as a whole. However this mayhem and brutal oppression of the ordinary people of Baluchistan cannot last forever. Sooner rather than later the workers and the oppressed classes will rise. Not only in the most industrialised areas of the country but also in Baluchistan where the proletariat may be numerically not so large by its role in society and the courageous traditions it has it can arise in a movement and cut across the oppression of the state and imperialists.

The military operations and ‘combing of society’ have failed to check terrorism but have only brought more pain and difficulties in the lives of the ordinary people. Quetta today looks like a besieged city with military check posts every few meters and traffic routes diverted bringing traffic chaos and hardships for daily communicators. Other cities and towns of the country are not that different and are increasingly looking similar. Terrorist strikes will little impunity and their attacks are always planned with issues and timings. It exhibits the failure of the state to eradicate this terrorist plague. It’s only the mass movement led by the workers and the youth that can wipe away the terrorist ‘cells’ and individual when the society rises up to cleanse all forces of evil. But religious fundamentalism and terrorist outfits run with the huge amount of capital. These investors in terrorist enterprises are part of the ruling classes. The motives for these terrorist acts are financial extortion and imperialist hegemony for unrestrained exploitation. Hence without the overthrow of this diseased capitalist system through a mass revolutionary insurrection this menace of terrorism cannot be uprooted.