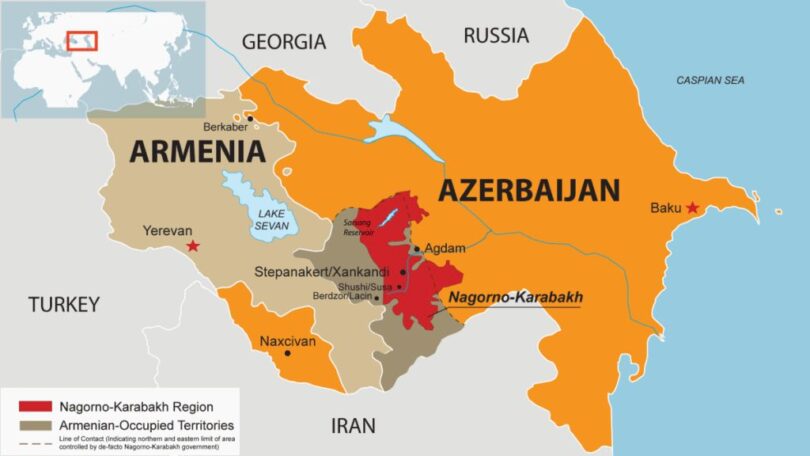 Azerbaijan and Armenia are once again struggling in the quagmire of endless conflicts. As is conventional, both sides claim that the other initiated the conflicts. The only thing changes in the Karabakh front is the participation of Erdogan’s Turkey in the war games. In other words, the new stop of neo-Ottoman fake madness is the southern Caucasus this time. The AKP government is busy with provoking wars and interventions. The technical source of pride of the neo-Ottomanist militarism, T2 Bayraktar drones hit Armenian military targets, Syrian mercenaries under the direction of the Turkish intelligence service (MIT) to Azerbaijan…

As Putin is not intervening now, Aliyev takes the courage for a battle that is in the source of the opportunities. Erdogan, on the other hand, is addicted to the neo-Ottomanist games and cannot do without it. While the HDP (the Kurdish Party in Turkey) is repressed inside, the opposition is labeled as the traitors and terrorists, these international adventures must be kept alive.

After all, deaths are from Syrian mercenaries or Azerbaijani wretches… Moreover, as Turkey burdens economic crisis on the poor people causing a deep misery, the main agenda should not be the economic crisis but these adventures. The recently published opinion polls upset the AKP. So it is necessary to call people’s attention to some other artificial agendas.

Thus, until Putin, the master bully, make a move, they will have the opportunity to create the nationalist environment they need. But, what then?

Then, as you know, there will be a U-turn, just like in the Mediterranean and Aegean issues. A disgrace? Yes; but there is no limit in brazenness for Erdogan. Erdogan has a media choir trying to show a disgrace as a success. Obviously, they are not fully successful about it, but these attacks are still vital for Erdogan. There is no tolerance for oppositional voices and those trying to show the truth. That’s why Halk TV(An Opponent TV Channel) was closed for 5 days as a punishment.

What is the Russian Bear After?

Putin clearly wants Pashinyan to eat dirt. Just as they let Lukashenko be beaten first in Belarus and then stood behind him, Armenia under Pashinyan should be stuck and rescued by Russia. Pashinyan was the leader of the protests that overthrew Sarkisyan, the man of traditional pro-Russian politics, in April 2018, and at that time received serious support from the West. It was known that Pashinyan wanted to balance Russia with the support of the West. But as can be seen, it is not possible for Armenia, which is fully dependent on Russia in military and economic terms, to change its direction within bourgeois borders.

Aware of the rift between Moscow and Yerevan, the Aliyev-Erdogan front seeks to profit from this situation. Plans were made on this, preparations were completed. But Putin will not allow his position as absolute ruler of the former USSR to be shaken. It cannot allow the Ottomans to enter the old Tsarist lands. After Pashinyan and the Armenian public who support him gets in trouble, Armenia will be in full alignment. The Kremlin’s game plan is very clear.

It seems that Erdogan and Putin had a nice relationship. So much so that when they talk about cooperation in Syria, the sale of S-400 missiles causing a crack in NATO, many people were surprised by this. But when you look at it, it was Putin who prevented Erdoan from bringing Assad down.

Okay, it was Putin who let Erdogan to attack the Kurds in Syria, but when the USA left the YPG alone, it was Putin who stopped Erdogan again. It was also Putin who ordered the attack, which caused the death of 33 Turkish soldiers by bomb attacks in Idlib. Putin was then among those who stopped RTE, this time in Libya. Before the Neo-Ottoman offensive could realize its achievements, Sirte had to stand before them. Putin will step in soon in Karabakh too. It seems that Putin and Erdogan will face each other in Idlib, which then started to warm up again these days. After all, in this supposedly friendly relationship, it’s clear who wins and who gets sucked! Especially when we consider that S-400 systems, which the TAF could never use, were paid as large as 2.5 billion dollars.

The rulers of the two countries, as they have repeatedly, are trying to confuse the Armenian and Azerbaijani laborers who are floating in poverty with the poison of nationalism. It is the capitalists and dictators who always fill their pockets in these conflicts, but those who die are poor laborers.

The AKP should end its policies that provoke war in our region. The imperialists who sell weapons to both sides are the other winner of this war.

Neither the interests of the Azerbaijani nor the Armenian people are in common with their rulers, who are on the brink of war today. Their salvation can only be possible by freeing from this abominable order, which lives on blood, tears, and hatred, and by raising the struggle for socialism where the sisterhood of the peoples’ reigns, equality is assured, and freedom is established.