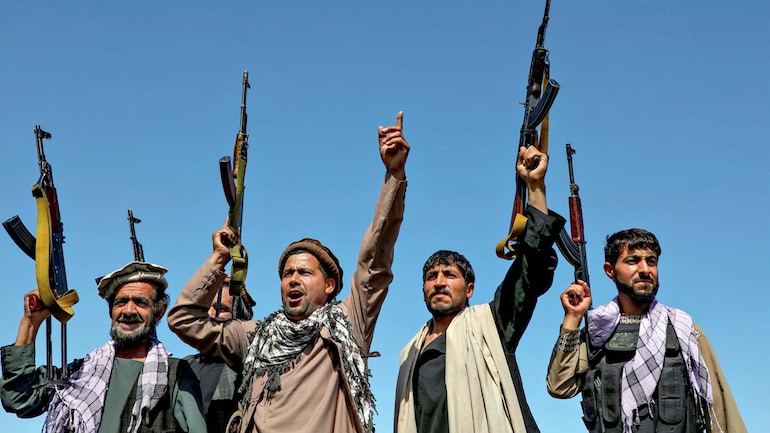 By John Pickard, Brentwood and Ongar

The strength of the opposition movements that have developed spontaneously in the last few days are an indication of how unpopular the Taliban are in Afghanistan – but they also point to a means of successfully opposing the Taliban that the US and UK forces in that country were never prepared to countenance.

On what was Afghanistan’s Independence Day, on Wednesday, celebrating the end of British rule in 1919, thousands of Afghans poured into the streets of the capital Kabul, as well as several other big cities, waving the red, green and black national flag, in defiance of their new masters.

The Islamists of the Taliban have adopted a new, white, national flag on which is written an Islamic oath. It was an act of heroic defiance for so many to wave the old national flag in defiance of the Taliban. In some cities there have been reports of Taliban gunmen firing on crowds. In Jalalabad, it was reported that at least three people were killed. Even in towns where there has been no open defiance, there is an uneasy calm as the sullen population struggles to come to terms with a ruling regime with little popular support.

While the people of Afghanistan wait in dread for what is coming – and women and girls especially, many of whom were not even born when the Taliban last implemented their medieval misogynism – the debates in Congress and the UK parliament have been notable for nothing but their sickening hypocrisy. There is hardly a politician in sight who has been prepared to say outright that the shambles in that country today is the real legacy of a completely unjustified invasion in 2001.

The Asia Foundation survey surveyed those who thought peace was ‘unlikely’ to give their reasons.

There is no acknowledgement, amid all the crocodile tears, that it was the policy of the CIA in the 1980s to provide arms and finance to the Islamic insurgents fighting the Russian-backed government then in Kabul. The Taliban is a creature of the CIA, although it may have turned into something of a Frankenstein since those days.

Labour Party members have to point the finger of blame to exactly where it lies – at Tony Blair and all of his supporters, including many who are still ‘Labour’ MPs today – who supported the war and occupation twenty years ago. We have to say clearly to the right wing of the Labour Party, “Afghanistan today is YOUR legacy!” The threat to democratic freedoms in that country? – “your legacy!” The threat to women’s rights and the rights of national religious minorities? – “your legacy!”. Rather than pontificating about the collapse of the Afghan Army, or the precipitate withdrawal of US troops, they should be hanging their heads in shame.

Billions Poured in to Prop Up a Corrupt Regime

In the entire twenty-year period of US and UK occupation and intermittent wars at no time were there any serious efforts to establish a genuinely open and transparent democracy. Hundreds of billions of dollars were made by the military-industrial complex in arms procurement. Hundreds of billions more were poured into the country to prop up a rotten and corrupt system, one that collapsed at the first serious test. 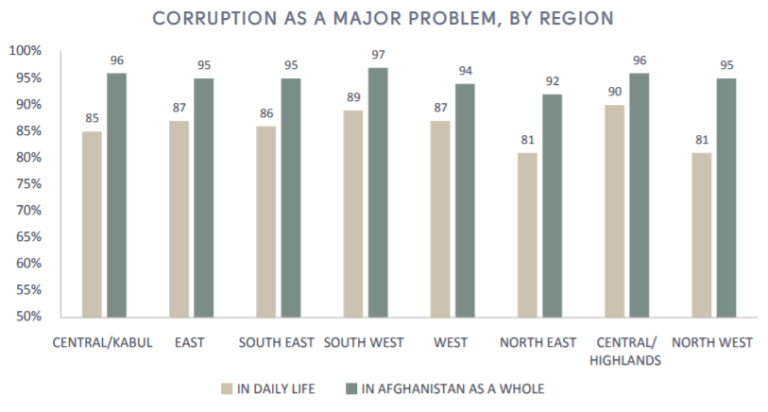 The Asia Foundation survey asked about perceptions of corruption, region by region as well as nationally

The chattering classes in the mainstream media are asking why the Afghan Army collapsed so easily. But the answer was there all along, and the intelligence agencies of the UK and the USA must have known. It was because top officers and officials were milking the system for personal gain, taking money for the wages of troops who existed only on paper, and not paying the troops they did have, and pocketing the loot. It was because top officers and government bureaucrats were paid to purchase ammunition and supplies for the Afghan security forces but pocketed the money instead.

From top to bottom, Afghanistan was corrupt. What is worse, is that it is likely that the proceeds are in banks in Europe and the USA, most likely in London, which is already awash with dirty money. The intelligence facilities of the National Security Agency and the UK’s GCHQ are sophisticated enough that they would be well aware of the transfer of dirty money out of Afghanistan.

That corruption was widespread was well known. In a 2017 report, Transparency International summed up the problem in these terms: “The Islamic Republic of Afghanistan’s sustainable development – and ability to achieve its Sustainable Development Goal (SDG) commitments – is continually undermined by the widespread, systemic presence of corruption in the country”. We might well ask, where was this mentioned in the House of Commons, even by Labour MPs?

Less Than 1 per cent  Thought Corruption was not a Problem

The partial uprisings in Afghan cities in the last few days have shown the genuine feelings of the mass of people. It is also an indication of what could have been achieved, had the governments of the UK and the USA been serious about defeating the Taliban. But they were incapable of arming the people and organising and training democratic, local militias, because such a course of action is organically against everything they represent.

Corruption, dirty money, massive profit for arms manufacturers, turning ‘blind eyes’ to brown paper envelopes stuffed with cash…all of these are written into the DNA of capitalism and that was the basis on which Afghanistan was ‘built’ after 2001. Over two thousand US troops and 457 British military personnel paid the price for this, as did and tens of thousands of Afghans. Unfortunately, there will be an even heavier price paid now by the people of Afghanistan, particularly women and all of those who supported the old state in any way.

P.S Bourgeois historians have deliberately equated the Saur Revolution with the occupation of Afghanistan by the Soviet armies, and have criminally tried to conceal that the Russian forces entered Afghanistan 18 months after the revolution on December 29, 1979.”
Among the many slanders hurled against the Saur (spring) Revolution was that it was “Soviet-sponsored”. This was entirely false, as even some of the western media were forced to admit. For example, Time magazine wrote in its January 28, 1980, issue: “The Marxist coup in which Noor Muhammad Taraki overthrew Daoud in April 1978 surprised the Soviets as much as the Americans. Western Intelligence has not been able to find Russian fingerprints on the scene of ‘the April Revolution.”
In a speech delivered on April 9, 1979, Noor Muhammad Taraki said,

“No outside forces were involved in April Revolution. Afghanistan neither imports or exports revolution… It has embarked on a new course that of building a society free from the exploitation of man by man”.