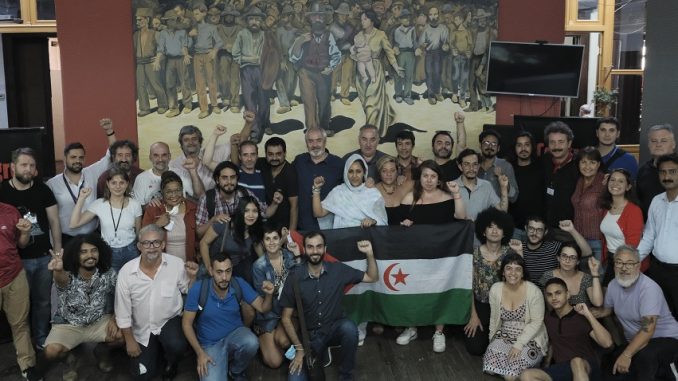 At the end of the 19th century, the aggressive plundering expansionism of European capitalism came to dominate the world, dividing Africa at the Berlin Conference of 1884. France got a large part of the continental north, colonizing Morocco, Algeria, Tunisia and Mauritania. The United Kingdom occupied Egypt and Sudan. Italy conquered Libya and Spain was left with Western Sahara. Colonial domination was met with resistance and from 1910 several colonies became independent, though they remained under the influence of the imperialist powers. After World War II, in the heat of the revolutionary rise that swept the world, the process of decolonization in Africa took on a new momentum. The establishment of the State of Israel in 1948 in the territory of Palestine, with the support of imperialist powers, was a trigger for the mass movement. In 1952, Gamal Abdel Nasser spearheaded the overthrow of the Egyptian monarchy and defined the contours of pan-Arab nationalism. There was a jump in anti-imperialist struggle, the founding of republics and declarations of independence, like those of Algeria and Libya. A fundamental part of the conformation of the Saharawi people as a nation with its own culture, political identity and traditions, was forged in the heat of these processes of class struggle.

In 1973 the Polisario Front was founded, on pan-Arab and socialist nationalist bases, to fight for the expulsion of Spain and achieve the independence of Western Sahara. In 1975, after the death of dictator Francisco Franco, Spain abandoned the last European colony in Africa that was under its control. It did so in agreement with Morocco and Mauritania, which militarily occupied the Saharawi territory and distributed it in parts, 70% and 30% for each of them respectively. The Polisario in arms led the war against the new occupiers and the popular uprisings and in 1976 proclaimed the Sahrawi Arab Democratic Republic (recognized by 80 countries and the African Union). In 1979, the Polisario triumphed over Mauritania, which withdrew from the invaded territory, but failed to defeat Morocco. In 1981 the Moroccan government, whose Alaui monarchy is allied to Spanish and French imperialism, raised the wall of shame along 2,500 km of desert with fortifications and land mines. The population was divided in two: those who were able to remain in their territory and those who were forced into exile in refugee camps located in Tindouf, Algeria, which bear the names of: El Aaiún, Auserd, Smara and Dakhla. Another part of the population lives in Europe, principally in Spain.

The fighting lasted until 1991, when a ceasefire was signed based on the promise of the United Nations to hold a referendum of self-determination. The United Nations Mission for the Referendum in Western Sahara (MINURSO) is responsible for the fact that the decolonization process has not yet been completed. In fact, the UN seeks negotiated solutions with Morocco instead of guaranteeing the Referendum, since it will not confront the politics of the US and the European Union. Meanwhile, the European countries and companies associated with Morocco loot the maritime resources and phosphate of Western Sahara, among other businesses.

In October 2020, a popular march blocked the Guerguerat border crossing to stop the looting of Sahrawi wealth. On November 13, the Kingdom of Morocco mobilized its army and repressed the protesters, violating the 1991 ceasefire. This led the Polisario Front to mobilize its forces and declare a state of war. From that moment on there has been a new situation, marked by warlike confrontations, diplomatic disputes, realignment of regional actors, active interference of foreign powers and Sahrawi mobilizations, mainly in the EU and particularly in the Spanish State. The youth revitalized the new Sahrawi advance for freedom and the recovery of their territory. The Arab Spring, questioning authoritarian regimes and the terrible living conditions of capitalism, together with the wave of rebellions that occurred in 2019, gave oxygen to the historical claims of many peoples.

The United States, Israel, France and the European powers support the Moroccan usurpation, while the Arab nations turn a blind eye. Former President Donald Trump recognized Morocco’s “sovereignty” in exchange for Morocco recognizing and establishing full diplomatic relations with the State of Israel, making the it the fourth Arab country to support the Zionists. It is a qualitative leap in the betrayal of Palestine, which Israel rewards economically, politically and militarily. The Spain of the “PSOE-UP progressive coalition” government plays a shameful role by ignoring its responsibilities as the administering power of Western Sahara, a legal position is still holds. Although it maintains a relationship with Morocco that is not free of friction and contradictions, it retains the country as a privileged associate, and as its “gendarme outside the EU” to prevent the passage of African migrants. The Russian Federation spoke out on different occasions for the compliance with UN resolutions. However, Mohamed VI and Putin hold productive and commercial agreements of such magnitude that they rank Morocco as Russia´s third most important associate in Africa and the second most important on in the Arab world. Part of Russia´s strategy is to extend its interests in the African continent and advance in the Mediterranean.

Faced with an intensification of the conflict, a decision of the General Court of the European Union overthrew the agricultural and fishing agreements signed by the club’s member states with Morocco. It did so arguing that the Saharawi people had not been asked for an opinion and recognizing the legitimacy of the Polisario Front as an interlocutor. It was a devastating verdict, which made the ambassadors of the 27 countries that make up the EU announce that they will appeal the ruling at the Court of Justice. For this reason, they announced that they will appeal the sentence before the Court of Justice. The EU and Morocco closed ranks, expressing the common desire that their bilateral relations not be shattered by the ruling. In the institutional framework of European imperialism, there is a mix of formality, contradictions in the face of the just Sahrawi cause and fear that the current tense situation in Maghreb may lead to another warlike confrontation, in this case between Morocco and Algeria, since the latter broke diplomatic relations.

The conclusions that can be drawn from the events of the past are a guide for elaborating politics today. Pan-Arab nationalism led great anti-imperialist struggles and implemented some partial progressive measures. But, because it never proposed to break with the capitalist system of exploitation and oppression, it limited itself to rebuilding bourgeois states with authoritarian regimes linked to some sector of imperialism. The disillusionment caused by the lack of profound change caused pan-Arab nationalism to lose popular support. Something similar happened with leaders like Yasser Arafat, who ended up negotiating with imperialism, set aside the position for the destruction of the State of Israel and weakened the Palestinian struggle.

The causes of Palestine and Western Sahara are twinned by the heroic struggle of their peoples against powerful enemies: imperialists, Zionists, monarchies and treacherous leaders. The International Socialist League stands firmly in the trench of the causes of these peoples for the recovery of their territories, the triumph over the invaders and against imperialist interference. We promote the broadest unity of action in mobilization with those who demand the self-determination of the Sahrawi people. At same time, we raise the need to promote the socialist revolution in Western Sahara and the entire region as the only way to free all peoples from exploitation and oppression, where workers rule and advance toward a free federation of socialist republics across all of Maghreb.

In view of all the above,

The First Congress of the International Socialist League resolves: